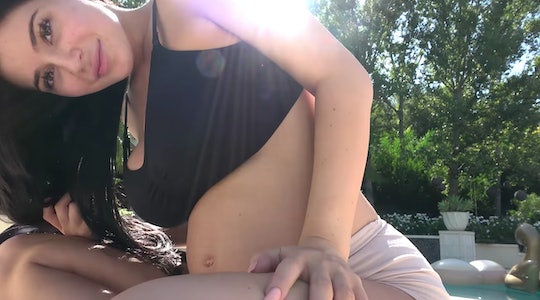 Kylie Jenner Shared More Deets About Stormi & Her Pregnancy On Twitter, & Fans Are Loving It

Despite being part of one of the most high-profile celeb families on the planet — as well as someone who literally owes their entire career to reality television and social media — Kylie Jenner actually managed to keep her entire pregnancy out of the public eye, and honestly, it was pretty impressive. The good news for curious fans though is that she doesn't seem to feel the same need to hold back now that her daughter is here: On Twitter Sunday, Kylie Jenner said her pregnancy with Stormi was "perfect," and her followers were beyond thrilled to hear more details about her life as a new mom.

Jenner took to Instagram Saturday night to share a pretty impressive bathroom mirror selfie with bestie Jordyn Woods before the two headed out to Tristan Thompson's 27th birthday party, according to Us Weekly (who says you can't wear a crop top and tight leather pants a month after giving birth?). But after what was likely a very-much-needed night off from motherhood, Jenner seemed totally down to spill all the details about her baby girl, and was more than happy to respond to her followers' questions. Later the next day, the makeup mogul tweeted "Sunday’s with Stormi," prompting hundreds of comments and questions about her little one, and in a series of follow-up tweets, Jenner actually took the time to answer.

Stormi may have only entered the world Feb. 1, but from the sounds of it, Jenner's Twitter followers are so ready to see her baby start to hit some adorable infant milestones. One commenter told Jenner, "I want to hear the way Stormi laughs," (Jenner's reply? "She hasn’t laughed yet. But she smiles A LOT"), while another wrote, "I feel like dressing her up every day would be so fun!" (Mom's response: "Yes! Can’t wait till she’s a little bigger.") But as exciting as those moments would be, Jenner also made it clear she was still basking in her daughter's early days, and wasn't exactly in any rush to see them go: after others shared comments discussing Stormi's future first words or her first Halloween or Christmas, Jenner wrote, "Omg can’t wait to watch her grow but don’t want her to at the same time!"

That wasn't all Jenner had to share though. Though the reality star did give fans an inside glimpse into her pregnancy in an 11-minute YouTube video filled with private footage after she gave birth, many of her followers still had questions. When one user asked about the best and worst parts of Jenner's pregnancy, she replied, "there really was no worst part! Probably not being able to eat sushi lol." But food restrictions aside, Jenner said she had "had such a perfect experience" being pregnant, and that Stormi "moved a lot" in utero.

From the sounds of it, sushi wasn't her only pregnancy craving though: Jenner wrote that she was a big fan of In-N-Out Burger, doughnuts, and Eggo waffles, which she says she never actually liked before she was pregnant, and which she hasn't eaten since she gave birth (pregnancy hormones work in very strange ways, clearly). As for the first thing she ate after giving birth? Jenner wrote, "the bread from Craig’s! I had it waiting for me lol."

Other details the world learned from Jenner's Twitter chat? Stormi's dad, Travis Scott, is "the best" when it comes to caring for his daughter, and, like Jenner's big sis, Khloé Kardashian — who was super surprised to learn that she was pregnant with a girl — Jenner said she and Scott had actually felt pretty certain they were expecting a boy before they learned Stormi's sex. She also revealed that Khloé was the first of her sisters to learn of her pregnancy (though it could have been Kourtney — sorry Kim), and that mom Kris Jenner was "sooo supportive," after Jenner shared the news with her. And when one pregnant follower asked if she had been afraid of giving birth ahead of Stormi's delivery, Jenner had some wise words to share: "I wasn’t afraid! & you shouldn’t be either. We were made for this."

Although it came as quite the surprise when rumors of Jenner's pregnancy first started swirling, her comments about pregnancy and motherhood make it pretty clear that, actually, she was totally ready, and now she's loving being Stormi's mom. What also seems clear though is that, while Jenner was adamant about keeping her pregnancy private, she's more than happy now to share her joy. And unsurprisingly, that's great news as far as her fans are concerned.