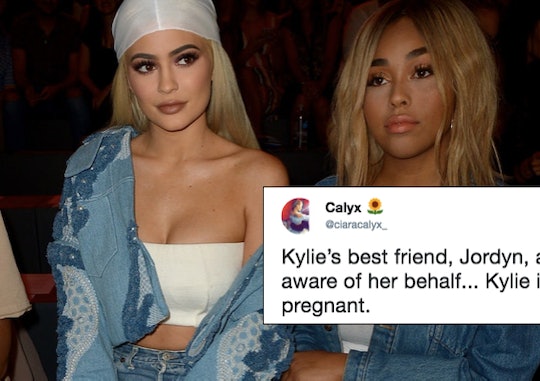 If there's one thing everyone wants for Christmas, it's a confirmed Kylie Jenner pregnancy announcement. The 20-year-old reality star is reportedly expecting her first child with rapper boyfriend Travis Scott, but she has yet to go public with the happy news. Which means fans and social media detectives have to spend an inordinate amount of time digging for clues. It's pretty exhausting, but perhaps the end is near. Ever since Jenner sent her BFF to accept a beauty award, fans figure that's basically like a real confirmation. So Merry Christmas, everyone!

Jenner has been keeping things super low-key over the past few months, ever since it was initially reported at the end of September by Us Weekly that the young cosmetic mogul and the "Goosebumps" rapper were allegedly expecting their first child. At the time, sources claimed that Jenner was around four month pregnant with a baby girl. Since then, Jenner has been heavy on the smoke and mirrors, and light on any actual confirmation (or denial). But perhaps that's just what she was doing when she sent model Jordyn Woods, and her longtime best friend, to accept her WWD Beauty Inc. Newsmaker of the Year award, as People reported on Thursday.

And fans are certainly convinced that Jenner's notable absence is *proof* that these pregnancy rumors are true. Romper reached out to Kylie Jenner's rep for comment and is awaiting a reply.

Why are fans so certain that Jenner's absence must mean that she's definitely pregnant? Well, for one thing, Jenner has historically been more than happy to attend glamorous events. She's been a mainstay at the Billboard Music Awards, the Met Gala, MuchMusic Video Awards (which she and sister Kendall Jenner co-hosted in 2014)... and she wasn't even winning a prestigious award herself in those cases. And it seems unlikely that she would miss out on accepting an award from WWD, the publication that effectively legitimized Kylie Cosmetics back in August by announcing that it was well on its way to becoming a billion dollar brand. Under normal circumstances, this seems like the perfect opportunity for the young entrepreneur to strut her stuff and reign triumphant as the Newsmaker of the Year.

Yet she sent her BFF in her stead.

Perhaps because, as has often been reported, Jenner may actually be around 7-months-pregnant, should these rumors be true. And it would be extremely difficult to hide a third trimester pregnancy, as she's said to be doing the few times she's been caught by paparazzi in public. Jenner, like her sister Khloé Kardashian who is also reportedly pregnant, has been hiding her possible pregnancy bump under baggy sweatpants. She's also been considerably less active on social media.

And fans think the time has finally come to confess.

Some fans took to Woods' Instagram post to call out Jenner (in some cases quite forcefully) to admit that she is pregnant:

"@kyliejenner you’re letting your fans down kylie!" one fan commented. "Pregnancy is nothing to be ashamed of! Everyone knows just come out about it already."

While another follower praised Jenner's reticence to share her pregnancy with the public. "Because she is choosing to enjoy her pregnancy and keep it out of the light im [sic] assuming," they wrote. "Wise move in my opinion, especially with how phyco [sic] and rude the internet is."

In reality, fans can play guessing games and hunt for clues all day long. But it's really not Jenner's responsibility to share her news (if, indeed, there is news to be shared) before she's damn good and ready. As a woman who grew up in the limelight, maybe she would like a moment to herself.

Sure, it would be great to get the official confirmation. Not because Jenner owes it to her fans. Just because babies are always exciting, you know?

More Like This
Kylie Jenner Shared The Sweetest Video For Baby Aire's 1st Birthday & He's Such A Cutie
Sheryl Lee Ralph's Husband & Kids Are Her Biggest Cheerleaders
Everything You Need To Know About Chris Stapleton’s Wife & Kids
Philadelphia Eagles Wide Receiver A.J. Brown Says His Kids Give Him “Strength”
What Parents Are Talking About — Delivered Straight To Your Inbox