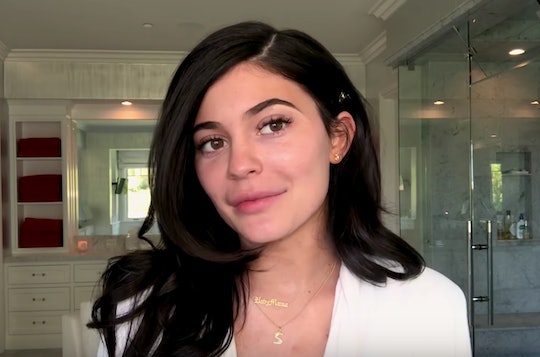 Kylie Jenner is currently on vacation on a yacht off the coast of Italy celebrating her 22nd birthday. While most of us can't exactly relate to this kind of luxury, you'll probably be relate to the fact that she brought her daughter with her on their travels and, as life happens with kids, some pretty fun hijinks have ensued, of course. For example, while on vacation, Kylie Jenner had a very relatable mom moment involving her phone getting in the hands of her toddler and, TBH, the photo will make every parent chuckle a little.

This past week, Jenner has been celebrating her birthday with a "#birthdaytour of Italy." The birthday girl, along with her boyfriend Travis Scott their 1-year-old daughter Stormi, as well as their closest friends, seem to be having the best time. Based on the photos they've shared on Instagram thus far, it looks like they've spent their days relaxing and enjoying everything that the coast of Italy has to offer.

The vacation hasn't been all about partying though; Jenner and Scott have also gotten to enjoy a lot of quality family time in. In fact, throughout the week, Jenner has shared the cutest photos and videos of Stormi, showing them wearing matching outfits and hanging out on the boat together. And there's even video of Stormi singing her mom "Happy Birthday."

It seems, however, that when Jenner isn't on her phone, posting that incredible content on Instagram, it's likely in her daughter's hands for a bit, as it usually happens with toddlers. And, as parents know, when toddlers get ahold of your precious iPhone, they'll do whatever they please. And that's exactly what Stormi did. On Tuesday, Jenner took to her Instagram Story to share a hilarious screenshot of her camera roll after Stormi had it. So, of course, her phone was filled with random photos, showing all angles of the deck of the yacht and something bright red.

"Every time I open my camera roll...Lol moms you know," Jenner wrote on the photo.

Although Stormi isn't necessarily a professional photographer right now — I mean, she's only 1 year old, she'll get there — she continues to make the world totally melt with all of her adorable moments.

For example, in one video posted to her mom's Instagram Story this past July, Jenner revealed that little Stormi knows the alphabet, numbers, and colors already, according to People. And in a video posted to Scott's Instagram that same month, he revealed that Stormi's vocabulary was already quite impressive with her saying "hi" and "bye" to the camera while in her dad's arms.

Kylie Jenner and Travis Scott's little girl is clearly loving life; not only is Stormi enjoying her luxurious Italian vacation with her parents, but she's been giving her mom, and Jenner's followers, plenty of chuckles along the way. And whether you're a makeup mogul with a billion dollar empire to your name, Stormi's mischief with her mom's phone is something every parent can relate to.