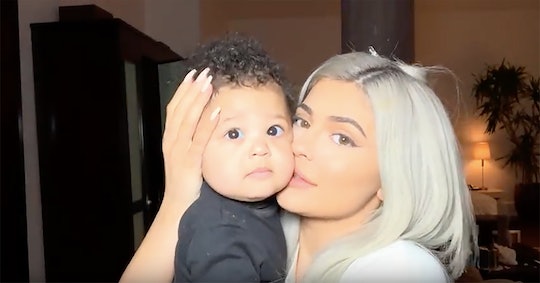 Happy 1st Birthday Stormi! Here's A Look Back At Her Most Adorable Moments

It's pretty hard to believe, but Kylie Jenner's little girl Stormi turned 1 on Friday, Feb. 1. It's a huge milestone for any kiddo, and Jenner has been looking forward to this moment for months (literally). In honor of the baby's special day, here's a look back at her cutest moments.

On Feb. 4, 2018, Jenner released a YouTube video announcing Stormi's birth, titled, "To Our Daughter." The video racked up a whopping 80 million views since it was first shared, which just goes to show how many people are interested in Stormi's life.

Speaking of Stormi's first year on earth, she has had an incredible and busy 12 months. Not only did she go on tour with her dad, Travis Scott, but she also spent a lot of time getting to know her gaggle of cousins. Additionally, the little girl learned how to talk (there's a precious video of her saying "dada") and she's already well-versed in the art of fashion.

If you have enjoyed basking in Stormi's cuteness (it's kind of hard not to right?), there's a good chance you'll want to check out her most adorable moments from this past year.

What could be more precious than Stormi's first public photo? In her big debut, Stormi grasps Jenner's finger as she lounges in a pink ensemble. "Stormi Webster," Jenner captioned the pic.

In March 2018, Travis Scott shared a sweet photo of Stormi sucking on a pacifier as she raised her little hand for the camera. It almost looks like Stormi is waving "hello" to her adoring fans.

There's arguably nothing sweeter than a parent bonding with their child. This photo of Stormi in white kicks is cute for many reasons, but especially because it highlights her sweet bond with mom.

May: Hanging With Auntie Kourtney Kardashian

This video of Stormi hanging out with her aunt, Kourtney Kardashian, on Mother's Day is a winner. You can't go wrong with cooing and teddy bears.

I think many people agree Stormi is absolutely stylin' here. What an adorable fashionista.

Oh, and did I mention Stormi dressed up to celebrate Penelope and North's birthdays? Fun times all around.

July: Look At Her Little Bun

Although you can't see Stormi's face in this pic, her tiny bun makes the shot. It's so tiny and so cute.

August: All Smiles With Dad

"Big mood ! Teach my stormi to love," Scott wrote about his daughter at the time. "I’ll forever protect that smile."

In an adorable bonding moment, Stormi enjoyed a sleepover with her cousin, Chicago, in September 2018. I love the matching outfits here.

October: Twinning With Mom For Halloween

The butterfly symbol is a big deal in the Jenner-Scott family, so this photo is especially touching. Plus, you can't go wrong with a baby in a Halloween costume.

In this video, Jenner tries to teach Stormi how to say "Kylie Jenner Cosmetics," which she struggles to do. And instead of naming her mom's line, Stormi utters an adorable "dada." Aww.

How gorgeous is Stormi in this shot? It looks like the baby had a great time at her first Christmas Eve party. Rock on, girl.

January: Chip Off The Old Block

My favorite video of Stormi? Look no further than this clip of the little girl slinging a purse over her shoulder, which seems like a move her mom would definitely pull. Stormi then waves "bye bye" to the camera.

"Daddy dropped off a new chair for stormi," Jenner captioned the post. "And omg this girl threw the bag over her shoulder I can’t."

That's a wrap, folks. Happy birthday to Stormi and here's to many more adorable moments to come!