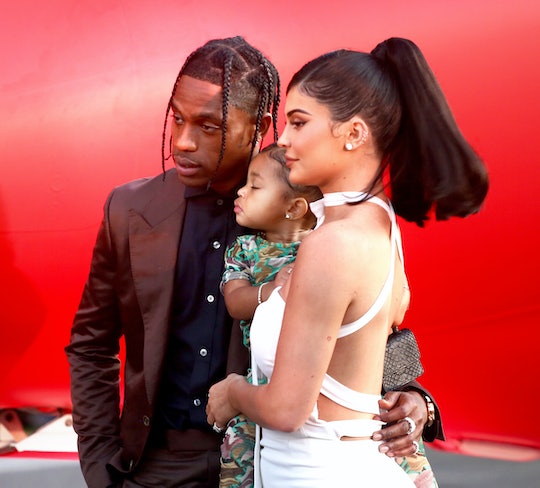 Though most people may never experience this exciting, paparazzi-filled milestone in their lives, Kylie Jenner's adorable daughter Stormi has officially made her red carpet debut. At just 1 year old, little Miss Stormi Webster hit the red carpet in the cutest ensemble while in her mom's arms in honor of her dad rapper Travis Scott's latest project.

On Tuesday night, Scott, Jenner, and baby girl Stormi attended the premiere of Netflix's new documentary about Scott's life and career, Travis Scott: Look Mom I Can Fly, according to Page Six. The "intimate" documentary explores how Scott has "[juggled] controversy, fatherhood and career highs," according to Netflix, so it certainly makes sense that the rapper brought along Jenner, who he often calls "Wifey," and his sweet daughter. And while this was a big night for the entire crew, Stormi didn't have to travel too far to smile and wave at the media as the event took place in Santa Monica, California, not far from Jenner's Los Angeles-area home.

Dressed in a stunning white number, Jenner held her 18-month-old daughter, who donned a cute green-patterned outfit with her hair pinned to the side and some comfy white sneakers, as they posed for cameras. Scott stood close by, lovingly looking at his daughter with his arm around Jenner's waist.

Though he's not incredibly active on social media and doesn't often discuss his life as Stormi's dad, Scott's Netflix documentary gives his fans an inside look at how he's adjusted to fatherhood, his relationship with Jenner, as well as his own childhood "as he prepares for the release of his 2018 album, Astroworld," according to Rolling Stone.

For example, the trailer for Travis Scott: Look Mom I Can Fly shows one especially sweet moment between Scott and his daughter. Around the 59 second mark, you can see Scott zooming Stormi, who has the biggest smile on her face, around a room like she's a little jet.

Tuesday night's red carpet debut wasn't the only time Stormi has shown her support for her dad's work. Also in the trailer for the documentary, you can see Scott holding Stormi in his arms backstage, looking at a sea of fans, as he prepares to perform. In fact, Storm's with her dad so much while he's on the road for work that she had her own room on his Astroworld tour, according to E! News.

Though they each have bustling and demanding careers, it seems that spending time together as a family is a top priority for both Scott and Jenner. For example, in an interview with Rolling Stone in December 2018, the rapper told the magazine about "Stormi Saturdays."

"We don’t let nothing come over Stormi time. Stormi Saturdays. We don’t f*ck around with those," Scott told Rolling Stone last year. "Even with me on tour, Stormi pulls up. She’ll travel. She got more stamps on her passport than a lot of motherf*ckers."

Whether they're hitting red carpets together, practicing how to say "hi" and "bye" — as Scott detailed in this sweet Instagram video — or just hanging out back stage, Jenner, Scott, and little Stormi are a clearly a solid crew. And, hopefully, if we're lucky, Miss Webster will become a regular red carpet addition.