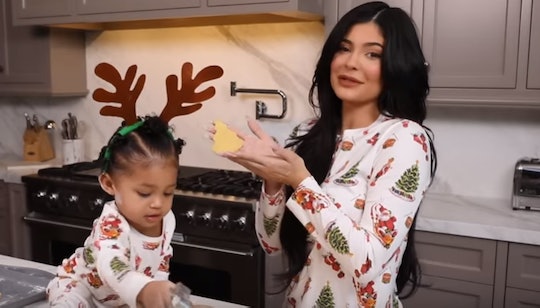 Kylie Jenner's Daughter Stormi Uses Her As A Chair, Just Like All Toddlers

Have you ever wondered what it must be like to be a child in the KarJenner family? To be born into such wealth, with every member of the family more famous than the next? If it's intimidating for little ones to come to terms with their moms being mega-stars? Well, according to Stormi Webster, it's really nothing at all. In fact, Kylie Jenner's adorable daughter Stormi has no problem just sitting on her mom's head to watch TV. This little girl clearly does not care that her mom is a super famous billionaire. To her, she's just mom and mom's head is the perfect place to perch herself while she enjoys a little TV time.

Jenner's daughter Stormi, whom she shares with her ex Travis Scott, is nearly 2 years old, if you can believe it. The little girl was born on Feb. 1, 2018, which means she is dipping her little toes into her toddler years. And from what Jenner's fans can tell from her social media updates about her daughter, her life often threads the needle between being a privileged kid and regular little girl. For instance, her mother recently revealed some of Stormi's Christmas presents on Instagram, including a playhouse from grandmother Kris Jenner that looked like an adult person's dream house.

That seems rather grandiose, of course, but before you go thinking that her fancy child play house has changed her from being a regular kid, please enjoy this moment Jenner captured of her casually sitting on her head and ignoring her while she watches TV.

In a video she shared on her Instagram Story, Stormi can be seen wearing a comfortable-looking sweatshirt and absentmindedly chewing on the string as she watches television. She is also absentmindedly sitting somewhere around her mother's neck or shoulders or chest or head, it's sort of difficult to tell since Jenner is barely visible. Not that she appears to mind, of course. The Kylie Cosmetics mogul seems to be taking the video, after all.

Despite the fact that Jenner was previously identified as a self-made billionaire by Forbes, she is wonderfully down-to-Earth when it comes to her little girl. Sure, she loves to buy her daughter extravagant gifts that get people all hot under the collar, but she's also happy to lay in bed and let her little girl climb all over her.

The KarJenner kids live very different lives from your average little ones, no question. But at the end of the day, Kylie Jenner's daughter doesn't care if she's one of the biggest social media influencers of all time, or a billionaire, or a reality star. She just wants her to sit still so she can use her as a perch like all the other toddlers with their moms.

More Like This
Hilary Duff's Daughter Mae Is Every Toddler Obsessed With 'CoComelon'
People Are Convinced Kylie Jenner Gave Her Baby Boy A Weather-Themed Name
New 'CoComelon' & 'Blippi' Halloween Episodes Are Coming — & We Have Sneak Peeks!
New Barney Docuseries Will Dive Into The Dark Side Of The Beloved '90s Kids' Show