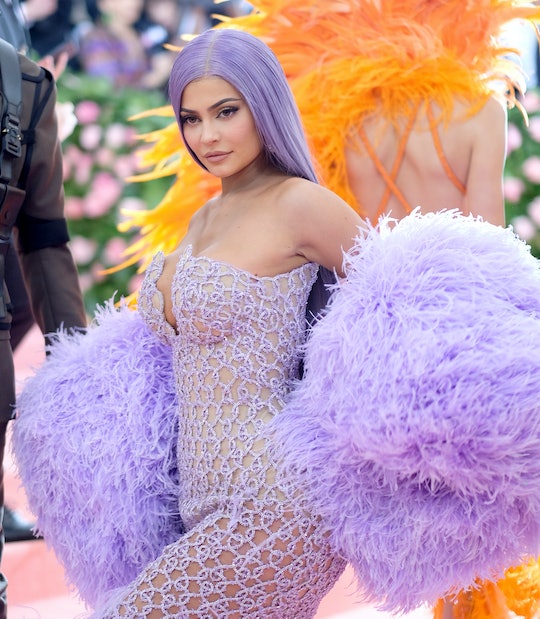 Trick-or-treaters dressed up in their most ghoulish get-ups haven't hit the streets quite yet, but one pack of pups might have won Halloween 2019 already. At least in the dog category, which I just made up. If we're taking votes now, and I think we should, Kylie Jenner's dogs dressed up as Toy Story characters would definitely tally up a bunch.

On Monday evening, the makeup mogul shared a few photos and videos on her Instagram Story, showing her pooches dressed up as Woody, Buzz Lightyear, and Bo Peep from the Toy Story franchise we all know and love. "OK guys, it's Halloween," Jenner says in one video on her IG Story, showing all three dogs in their costumes. "My little Toy Story kids."

Beyond being her daughter Stormi's mom, of course, the Keeping Up With The Kardashians star is also one proud dog mama to her little pack of Italian greyhounds. Though it's not clear who is who in their Toy Story get-ups, Jenner's dogs include Norman, Bambi, Sophia, according to Teen Vogue.

One of her doggos dressed up as Sheriff Woody. In one video on her Instagram Story on Oct. 14, Jenner says, "Hi little Woody, smile for the camera." And who's Woody without his best buddy Buzz Lightyear? Jenner, of course, dressed up one of her Italian greyhounds as Buzz, saying in a different video, "Get your little helmet on, make sure it's secure."

Don't worry, Jenner didn't forget about Woody's love interest, Bo Peep. In one photo from her Instagram Story, you can see one of her dogs in a silky pink dress — ruffles and all — complete with a bonnet.

And in a moment that all parents — pet and people — can relate to, Jenner tried to wrangle them all together for one perfect photo. And, as expected, it was not as easy as she probably hoped, but still made for an adorable moment.

It's really not surprising that Jenner already has her dogs dressed up for Halloween — she's a big fan of the spooky holiday and often goes all out with her costumes.

Just last year, in fact, Jenner got creative with her daughter, whom she shares with her ex Travis Scott, dressing up as a duo with a "Stormi Weather" theme. Jenner dressed up as a cloud while little Stormi as a gold lightening bolt. Also in 2018, Jenner dressed up as as a Barbie doll — in an actual box. Stormi also had several costumes last year; matching her mama, as Harper's Bazaar reported, Stormi and Jenner wrote the cutest and comfiest looking skeleton Halloween costumes.

Although Jenner hasn't yet revealed what she and Stormi will be dressing up for Halloween 2019, I'm sure it'll be pretty dang incredible and obviously over-the-top. Who knows, if we're lucky, maybe Jenner was teasing her fans and she, Stormi, and all her pups will dress up as the whole Toy Story cast. Just imagine Stormi as tiny Rex... Now that would definitely win Halloween.