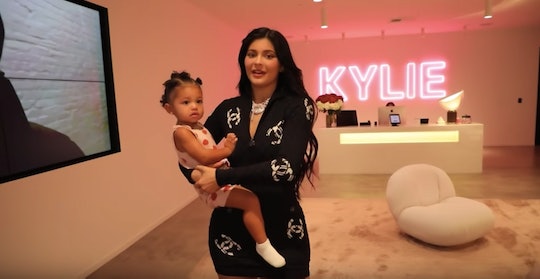 When I became a mom, one of the first things to go from my routine was the pretty pair of liquid eyeliner wings that I had worked so hard to perfect during college. Ain't nobody got time for that, right? Heck, even Kylie Jenner's makeup routine as a mom has gotten a major downsizing. You have to pick and choose your battles as a parent with young children, and complex makeup just doesn't feel as worth it when your toddler is crawling up your leg.

Jenner is mom to daughter Stormi Webster, who she shares with ex-boyfriend Travis Scott. The two welcomed their baby girl in February of 2018 and life has changed significantly since Stormi came into the picture. While she kept her pregnancy details under wrap for some time, Jenner has since opened up numerous times about what life is like as a mom.

In a past interview with the Evening Standard in May, for example, Jenner explained to sister Kim Kardashian how becoming a mom has improved her life. "Everyone says you change completely when you become a mom, but I really feel the same, just better," she said. "So I don’t know what really has completely changed my world, besides her, of course. But I feel like it’s only gotten better. You’re less selfish." She went on to explain the sense of satisfaction that she gets from caring for Stormi, including the nitty-gritty aspects, like changing diapers and keeping her clean.

Now, the mom and makeup mogul is dishing on how she keeps her makeup flawless in the face of endless mom duties. In a new video, Jenner explained how she has "cut [her] routine down a lot" since her 34-step tutorial for Vogue pre-Stormi, according to People.

"Since becoming a mom, it has gone from taking me 30 minutes to now having to do my makeup in 10 minutes,” she said.

One area that Jenner said she has has simplified is her eyebrows. “My routine before, I would start with my brows to make them super snatched but for my everyday routine I like to do them pretty fast and more natural,” she said. She moves on to her eyes, then comes lipstick — a must-have. “One product I can’t live without is definitely lipstick. I’m obsessed with lipstick. I don’t know what I would do without it,” she said.

The video that she uploaded to YouTube actually lasted a little over 17 minutes, but she promised that it takes less time when she does it IRL. “Because I’ll be explaining to you guys every step of the way, but this routine really takes me no longer than 10 minutes,” she said. Ten minutes sounds pretty doable to me, all kids considered.

It seems that Jenner's love for makeup has passed on to Stormi — perhaps from so many mornings of watching her mom perfect that 10-minute routine. In the same video, Jenner explained that “Stormi is actually super into makeup right now." When the 1-year-old spots her mom wearing lipstick, she says, "lip lip lip!" according to ELLE. And while Stormi may decide that makeup isn't for her now, she's currently begging her mom to let her at that pallet.

“I haven’t even thought about when I’m gonna let Stormi wear makeup. I don’t know, I’m just going to see,” Jenner said. “She might even not want to wear makeup. But honestly, how things are going, this girl is obsessed with makeup. She begs me at this point.”

A quick and easy makeup routine and some seriously adorable details about baby Stormi — that's a pretty great way to start my week. Thanks, Kylie!