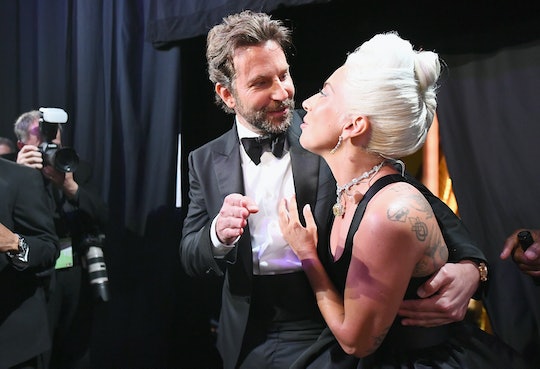 I really loved the movie A Star Is Born, more than I expected to if I'm being honest. Of course it had a lot to do with the music and the story, but like most people I was really in it for the on-screen chemistry between Bradley Cooper and Lady Gaga. I mean, they nailed it, didn't they? They were perhaps one of the most believable couples in any movie I've seen recently. So believable that apparently everyone wants them to be in love in real life. Well, Lady Gaga addressed rumors about her relationship with Bradley Cooper, so I guess all of those people are going to have to deal with some real talk, real fast.

The Oscar winner was a guest on Jimmy Kimmel Live! on Wednesday night when she decided to open up about Cooper, her on-screen love interest and director of A Star Is Born. Ever since the couple performed the Academy Award-winning song "Shallow" together on Sunday, the internet has been lighting up with speculation that they must be a real couple, as ELLE noted.

Why? Well they looked very loving on the stage and maybe everyone wants their movie relationship to be the real thing. Despite the fact that Cooper's girlfriend and mother of his child, model Irina Shayk, was sitting in the audience cheering them on the whole time.

Jimmy Kimmel asked Lady Gaga about her performance, pointing out that it had caused something of a "controversy" because of the raw, emotional connection between the two performers, according to Cosmopolitan. And the singer decided it was time to get real (after rolling her eyes at the question because she is obviously fantastic).

She went on to point out that "Shallow" is a love song and A Star Is Born is a love story. That both she and Bradley Cooper are consummate professionals who take their performances very seriously. And yes, they clearly have great affection and respect for each other. But the idea that they were laying some sort of clandestine love affair bare in front of millions of people on the Oscar stage?

Gaga explained further to Kimmel that the emotion people saw was specific to the performance... and noted that this isn't the first time she's added an element of drama when performing with someone:

It was so important to both of us that we were connected the entire time… Look, I've had my arms wrapped around Tony Bennett for three years touring the world. When you’re singing love songs, that’s what you want people to feel.

Gaga ended her response to the ~*rumors*~ by saying that she is an artist and she figures she and Cooper did a good job because they "fooled ya!"

I'm glad she addressed this in such a clear, concise fashion. Because when the internet wants to dig deep into a possible rumor, it takes a lot for them to die down. And I think Lady Gaga made herself clear enough to finally get everyone to knock it off, right?