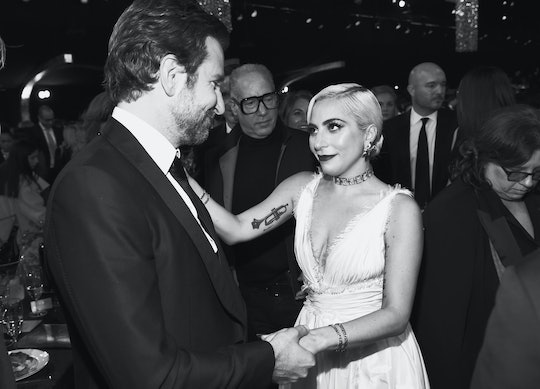 OK, *No One* Was Ready For Lady Gaga & Bradley Cooper's Oscars Performance

It's the performance everyone was waiting for — well, everyone who fell madly in love with A Star is Born, that is. Lady Gaga and Bradley Cooper's Oscars performance was as emotional and lovely as everyone expected — and naturally fueled rumors that the two are actually in love with each other and destined for an actual relationship.

In case you've been under a rock, nearly everyone in the entire world seems to think there's something going on with Bradley Cooper and Lady Gaga. (I am not one of these people, and I feel like you should know that up front.) It could be because they starred in A Star is Born together, the most romantic movie of 2018 (and of many years before if you're counting the other versions, which you should), which is also nominated for several Academy Awards, including the Academy Award for Best Picture, Best Actor (Cooper), and Best Actress (Lady Gaga). At the time of the performance, the movie hadn't won any awards yet.

But everyone's infatuation with the couple could also be a combination of the movie and the fact that Lady Gaga seems to worship the ground Cooper walks on (get in line, girl). In every photo of them, everyone marvels at how she seems to look at him as if he hung the moon, and their performance was no different.

The two sang "Shallow," their Oscar-nominated song from their Oscar-nominated movie, and it was quite the show. They left their seats holding hands to take the stage with a piano between the two of them. It was emotional, it was intimate — honestly I had to avert my eyes sometimes because it felt a little too intense.

Lady Gaga especially seemed to be floating in the air with her own talent, and when Cooper sat next to her, placing his arm around her and leaning in close to share the microphone — well. If I was Cooper's longtime partner Irina Shayk, I'd have felt a little uncomfortable sitting there in my seat watching the entire performance unfold.

The internet, of course, reacted as you would expect.

But perhaps I should remind the world that Cooper is in a serious relationship with Irina Shayk, and the two had a daughter in 2017 according to Elle. As far as my research knows, there's never been any rumor that the two were having trouble, so this obsession with Cooper and Lady Gaga is totally fueled by the movie. (And by Lady Gaga's comments, because of course a woman can't just appreciate a man and their friendship without it being something more than that.)

OK, but now the rumors might be fueled by this Oscars performance. If you take the gossip out of it, the duet on stage was incredibly touching, intense, and so amazing to watch. But it's also a major reminder that these people are actors and their entire job is to entertain. Cooper and Lady Gaga are pretty much aces at that, and this moment on stage proved it.