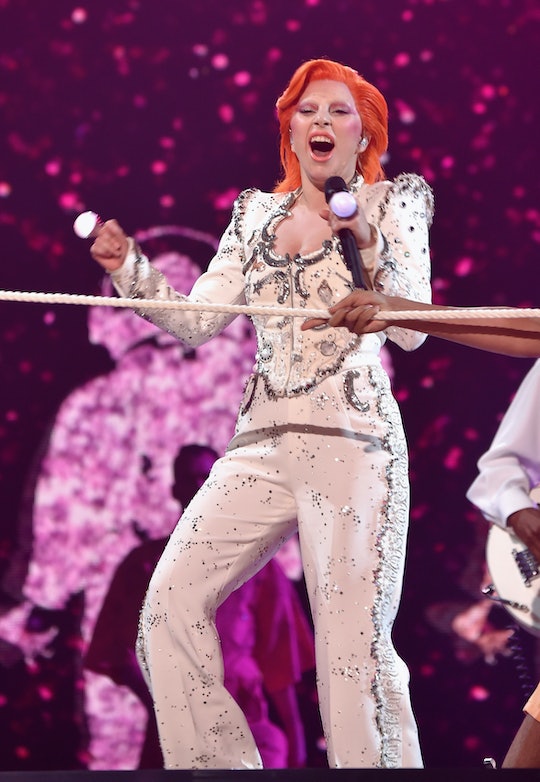 During Sunday's Grammys broadcast, Lady Gaga performed a David Bowie tribute, which largely amounted to her donning orange hair and bouncing around an overwhelming stagescape of sequins and bullsh*t, one well-meaning artist lost in a Bowie-themed Vegas casino act wrought from what I believe was probably a very sincere desire to commemorate the untouchably vast works of a behemoth of a Thin White Duke. Which is to say, the David Bowie tribute — a multi-song, multimedia medley of songs seemingly chosen to remind 16-year-old viewers that they did, in fact, know who Bowie was; they totally remember hearing that one song in the car with their mom when they were little — was kind of, well, lacking. And surprising, considering the source.

So what was the big problem with the highly publicized tribute? Well, mostly that it wasn't a tribute at all.

And the thing is, the "tribute" could've been a fine thing had it been touted as a "Lady Gaga performance," which is, after all, exactly what it turned out to be. But calling Gaga's performance a "tribute" gave fans some unrealistic expectations, it turns out. Some fans — including yours truly — thought the number would perhaps be, ya know, a tribute to David Bowie's music and the man who made it. But, instead, we got Lady Gaga covering Bowie. And that's a marked and game-changing difference.

When an artist covers another artist, the whole point is to take someone else's song and make it your song. It's why cover songs are fun. Had this Grammys performance been packaged as "David Bowie in the style of Lady Gaga," Bowie fans probably would've been like, "Hmm, I mean, sure, why not. It's not exactly what I want, but it'll probably go down just fine. OK." Kinda like going into a vegan restaurant when you actually want ribs: You knew what you were going to get when you walked in, so you're still going to eat what you order and not bitch too much about it.

That is what a "Lady Gaga Grammys performance (during which she covers some Bowie songs)" would've felt like to Bowie fans. But that's not what we were told we were getting. We were told we were getting a tribute. And a proper tribute should be the opposite of a cover performance: It should involve the performing artists bending themselves and their skills and talent in service to the songs they're playing. Not the other way around. A tribute is supposed to be about an artist using themselves and their instrument as a platform for displaying someone else's incredible, honorable work — not appropriating it, and in this case, watering it down within an inch of recognition.

I don't think this was all a Lady Gaga Production™. Like, it's the Grammys, and I'm sure the whole cheap spectacle of a group-powered shitshow.

Maybe (definitely) I was expecting too much. Did I want to see Gaga gripping a microphone singing "Be My Wife" while St. Vincent shredded behind her (St. Vincent is in this fantasy too)? Or maybe even something as seemingly reasonable for a primetime music awards event like Lady Gaga unceremoniously using her painfully talented voice to elevate a flawless song like "Heroes," starkly thrusting the song itself so cleanly and boldly into our ears that we had no choice but to pause and ruminate of the heartbreaking perfection, which we might've become complacent to after having it in our lives for so many years? Did I think that maybe this "Lady Gaga tribute to David Bowie" might, indeed, be a beautifully shocking moment of checking our collective Bowie privilege amidst a reverent, impassioned showcasing of some of his best songs?

YES, MAYBE I DID WANT ALL OF THAT, OK SOME OF IT, OK I WOULD'VE SETTLED FOR FEWER DISTRACTIONS THAN A KEYBOARD WITH MOVING LEGS.

Did I expect it? Not really. But I also didn't expect a rapid mashup of greatest hits framed within a performance that felt so much more about Lady Gaga showing off her David Bowie impersonation than showing off the music of David Bowie. And that's probably what I, and other fans, should've anticipated all along. Maybe Lady Gaga's inability to set herself and her art aside for one night in service even to David freaking Bowie is the ultimate symptom of her total fandom: Maybe she's spent her entire creative life so thoroughly drunk on the distinct kind of empowered self-expression that Bowie convinced us was possible by living it for half a century in front of us, that she was too good a student and, in the end, couldn't take herself off the stage for long enough to become the stage for a few minutes in celebration of the man who ostensibly taught to give her art an ego of its own.

In the end, Lady Gaga couldn't take herself off the stage for long enough to become the stage for a few minutes in celebration of the man who taught to give her art an ego of its own.

But also... Lady Gaga is not David Bowie and he was one of the most incredible musicians and songwriters who literally ever lived, and she's not. And as much as I love her, she needed to chill tonight.

In Lady Gaga's defense, how could she say no to doing a performance like this? I have no doubt that she is legitimately a Bowie fan, and although I tend to be skeptical of the sincerity of emotion when the person experiencing it so emphatically shines a spotlight on it, that's kind of her brand. And even if "public mourning as performance" turns my stomach and makes me want to throw myself into the sea, I also respect everyone's right to experience loss in their own way. I'm not going to claim that Gaga's mourning of Bowie's death is any less real because she cries on Instagram and I cry on the downtown 1 train.

So I'm not doubting the sincerity of her whole deal with all of this Bowie stuff, and frankly, who cares if I do? Whatever. I'm just saying this performance bummed me out. If our generation actually has anyone like Bowie (which I'll posit, without reservation, that we do not, but if we've got to draw parallels anywhere), there's room to make an argument for it being Lady Gaga. If not in the pure creative brilliance of her music, or the expansiveness of her catalog (she's a baby comparatively), then at least in the sense of being an artist whose vehicle of expression is as much their persona as it is their product.

So I get why she would've wanted to do this. I mean, who doesn't want to be David Bowie? I would've done it if the Academy of Recording Arts and Sciences had asked me, and I would've done a way worse job than Gaga, and you'd all be hating me, and I'd be like, "Suck it, friends, I got to dress up like Bowie and sing 'Suffragette City' at the Grammys; I don't need friends nor approval anymore!"

Anyway, none of this matters, because even if we could wrap our heads around the "tribute" itself, there's still something else that angered Bowie fans. Matters were definitely not helped by the fact that Lady Gaga's performance was capped by a commercial break that began with an Intel commercial... starring Lady Gaga... with an instrumental "Heroes" redux playing in the background... during which she says, "In the pursuit of great ideas, you just might find a hero." Like, if there was any doubt that this whole "Bowie tribute" was effectively more of a "Bowie party theme," the associated advertising just hammered that home. We get it, 2016: David Bowie's death is your emotional hook. We got it during the Super Bowl, we still get it. But can we be done now?