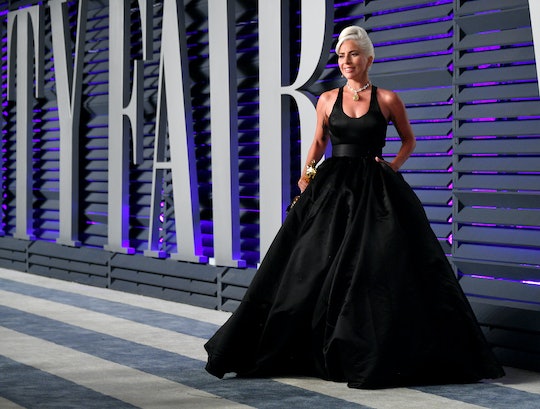 She's a hugely talented singer, a bona fide movie star, and now an Oscar winner, but it seems some people just won't be happy until a famous woman is in the family way. But, Lady Gaga's response to ridiculous pregnancy rumors popping up on the internet and in tabloids is just perfect.

As Harper's Bazaar detailed, the Star Is Born lead recently launched a one-year Las Vegas residency called "Enigma." And she must be totally on cloud nine after fulfilling her long-held dream of movie stardom, which culminated not just in an incredible role in a fantastic film but in multiple nominations and Oscar and BAFTA wins (according to entertainment database IMDB.com) for her work as an actress and songwriter.

So while fans don't really know Gaga's personal life, it doesn't exactly follow that she would be thinking about nesting right now, does it?

Luckily, the star has a good sense of humor about fame, and shot back on Twitter with a humorous response to the so-called baby buzz.

"Rumors I’m pregnant? Yeah, I’m pregnant with #LG6," she tweeted, referring to the fact that she is working in her sixth album.

But that's not all. According to BuzzFeed, the plot thickened when Gaga started following several music-industry pros in the wake of the buzz about her new "project" being about musical bars, not bouncing babies.

The most interesting fact? Gaga got herself on Rihanna's Instagram feed. Fans who follow these things noted that the "Shallow" singer follows only a couple dozen people on the social media site, so this may have to do with an exciting new creative collaboration for the new album.

BuzzFeed also noted that website Gossip Cop debunked the pregnancy rumors, which started with Star magazine speculating that Gaga was pregnant either with Bradley Cooper or ex Christian Carino's child, unbeknownst to Cooper's partner and mother of his child, Irina Shayk. Ridiculous — and crossing a line.

What does make sense is that people will gossip about famous people, especially famous women. In the meantime, fans simply can't wait to hear more about Gaga's new musical project.

Lady Gaga's last album (besides A Star Is Born's phenomenal soundtrack) was Joanne, Harper's Bazaar confirmed, adding that the star's previous collaborations have included one with jazz great Tony Bennett.

This time around, Gaga may be re-teaming with her Joanne producer, Bloodpop, BuzzFeed added. The singer did note that A Star Is Born won't be forgotten so soon, with Deadline Hollywood reporting that Gaga said the project will affect her future endeavors.

"Absolutely, [the film] will influence my future music," she told the entertainment website. "But that’s not to say I haven’t already written some music, so it will be a mixture of both. But I’ve learned so very much and I hope that I will always be a student. I think that that is where you stop being a great artist when you start believing that there’s nothing left to learn."

A great and humble attitude from an incredible artist who seems to be working her way toward winning every award imaginable. I, for one, wait for her next album and please, world, no need to rush Gaga into parenting. There's plenty of time for all of that, should she choose to pursue it.