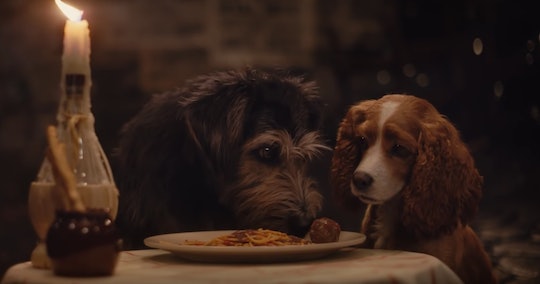 One of the most iconic scenes from Disney's 1955 animated classic Lady and the Tramp is, without a doubt, the spaghetti scene. It's so romantic and so sweet, which is why many Disney fans are hoping to the new live-action version, which will debut on Disney+ next month, will do it justice. And good news: a brand-new trailer shows a peek at the beloved Lady and the Tramp spaghetti scene and guys, I think we're in for a real treat.

Lady and the Tramp is coming to life once again when the live-action version premieres on Disney + on Nov. 12, the same day the streaming service launches. The new movie — starring Justin Theroux as the voice of Tramp and Tessa Thompson as Lady — brings new life to the 64-year-old classic. For starters, the dogs in the film are played by actual dogs, as People reported, making everything feel much more realistic. Even the iconic spaghetti scene where the two dogs from opposite sides of town go on a romantic date, share a plate of spaghetti, and share a sweet kiss once they finish eating the same strand feels like real life.

It's a simple concept, but it's so sweet, and the newest trailer for the rebooted Lady and the Tramp gives fans a quick look at this. In the trailer, the two dogs can be seen going on adventures, falling in love, and yes, almost sharing that plate of spaghetti, before it cuts to a new scene.

If Disney fans are excited to see this scene once again, you can only imagine how the stars of the movie felt during filming. As you might have expected, they were apparently pretty pumped to recreate it. "When I first heard about it, I thought 'Oh my god, of course!' I love Lady and the Tramp," Theroux told Entertainment Tonight. "I have a soft spot for dogs just in general." And Thompson told Entertainment Tonight, "I mean, when they're together eating the spaghetti, I think that sort of evokes so much for so many people."

Everyone knows dogs love table food, so of course it was easy to get the dogs to eat the pasta — except the scene wasn't actually shot with the real deal, as Entertainment Tonight reported. Filmmakers reportedly used lemon licorice in replacement of the pasta to get the dogs closer in the scene, and it clearly worked.

Because the movie is going directly to Disney+ on Nov. 12, the company's new streaming service, you won't be able to watch this scene on the big screen. But snuggling up on your couch with a bucket of popcorn sounds just as nice!

You can subscribe to the service for just $6.99 a month (or $69.99 for the whole year) to gain access to an extensive collection of Disney, Pixar, and Marvel movies and shows that will be available to stream and download. And subscribers will also get to watch new shows and movies (in addition the new Lady and the Tramp) that are exclusive to the streaming service, The Verge reported. It's not a steep price to pay to watch some classic and fresh content.