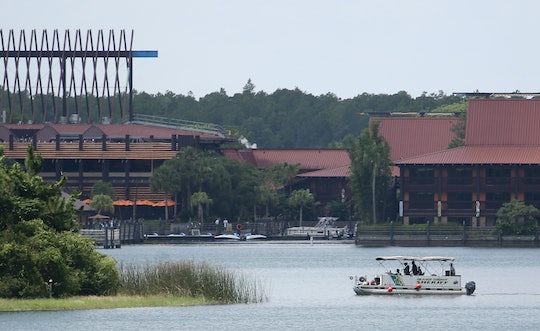 It's unimaginable to think about how the parents of 2-year-old Lane Graves are feeling now that they've returned home to Elkhorn, Nebraska without their son. Graves was killed Tuesday night after being snatched by an alligator while he was wading in the Seven Seas Lagoon off a sandy beach at Disney's Grand Floridian resort, and after extensive searching, his body was recovered 16 hours later, according to Us Weekly. In a show of support, Lane Graves' community is holding a blue ribbon tribute, with neighbors and friends spending the past 24 hours wrapping blue ribbons around trees, mailboxes and doors throughout the community in memory of the little boy.

According to local news station KETV Omaha, neighbors have also been working on other ways to help the family transition back to their life in Nebraska following their son's death, by setting up a volunteer "meal train," allowing people to take turns dropping off meals for the bereaved family, as well as volunteering to babysit Graves' 4-year-old sister Ella, to ease some of the burden on the parents, Matt and Melissa. A neighbor of the Graves', Tom Stokes, spoke to KETV about the community's desire to help any way they can:

The people here are very warm and there's definitely been a lot of outpour for the family. And I think everyone can relate to the time they've been to Disney World, taken their family there.

In the wake of the tragedy, friends and neighbors have expressed their shock and heartbreak over the loss of Lane Graves. Former neighbor Candy Robinson told People the Graves' were "a very nice family," adding, "You could tell they loved their kids. They were always outside playing with the kids." Her husband Stephen agreed, and said, "You never expect something like this to happen."

According to KETV, neighborhood children have set up a "Lemonade for Lane" stand at Elkhorn Valley View Middle School from noon to 5 p.m today, designed to raise money for a memorial to the little boy.

The Graves family released a statement Thursday, according to Us Weekly, thanking officials for their help in searching for their little boy, and also requesting privacy during what they understandably described as "an extremely difficult time." Walt Disney World also released a statement in regards to Lane Graves' death, saying, accoring to KETV,

Everyone here at the Walt Disney World Resort is devastated by this tragic accident. Our thoughts are with the family. We are helping the family and doing everything we can to assist law enforcement.

Jacquee Wahler, vice president of communications at Walt Disney World, also announced Thursday evening that the resort will be adding explicit signage to warn guests of the possibility that alligators could be in the water. While the lagoon Graves was wading in was marked with a "no swimming" sign, it didn't specifically mention alligators.

The Graves' were on the beach at Disney's Grand Floridian resort around 9 p.m. when an alligator lurched out of the water and attacked Lane. According to reports, his parents ran into the water to try and save him, but were unsuccessful. An official autopsy has ruled that the cause of death was drowning and traumatic injuries, according to People. A GoFundMe page has been set up for the Graves family to assist with funeral costs. Over $50,000 has been raised for the family since it was set up one day ago.