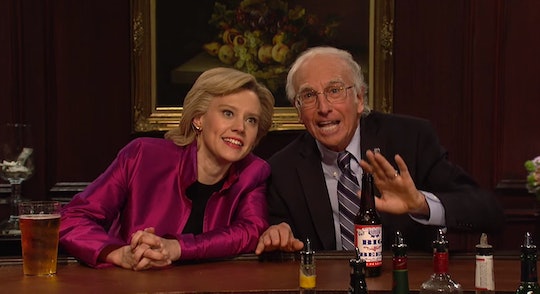 Throughout this crazy and sometimes terrifying election cycle, at least the humor on Saturday Night Live has been a bright spot. And nothing from the show has been more on point than Larry David's portrayal of Vermont Sen. Bernie Sanders. With the primary winding down and the show taking a break for a summer, Larry David played Bernie Sanders on the SNL finale for what could be the last time, and it was an excellent way to go out.

The show opened with Kate McKinnon's Hillary Clinton drinking alone at a bar, celebrating her somewhat-nebulous primary victory. Sure, she hadn't officially secured the nomination but, as she said to Kenan Thompson's bartender, "Mathematically, I've done it. To math!" Although the bartender wanted to close up, one patron wouldn't leave. And that patron was, of course, Sanders, who shouted, "I can stay here as long as I want!" It was a perfect way to capture the fatigue a lot of people are feeling about the Democratic primary right now. Everyone basically wants to go home, but can't.

Soon enough, Sanders joined Clinton in some reminiscing over one last beer. Sanders asked the bartender for "a new brand that people are flocking to, something refreshing and revolutionary, something that draws huge crowds." Clinton said she'd take "whatever beer no one likes but gets the job done."

The two nemeses made nice, or at least attempted to, with Clinton congratulating Sanders on having run a good campaign, and Sanders pointing out that he was still running it. Clinton even offered Sanders, as she said, "a very special role for you in my administration. How would you like to be... wait for it... the senator from Vermont?"

But soon enough the two began to bond, laughing over the time that Sanders told everyone to leave Clinton alone about her emails, even though that could've taken her down ("I'm so stupid!" he said), and giggling at how rigged the system was. They toasted to Democratic National Committee Chair Debbie Wasserman Schultz, the controversial leader who many have accused of undermining the Sanders campaign over the course of the primary.

They even shared their secret dreams with each other, with Sanders admitting, "I dream about being a fancy millionaire or billionaire. I wear a fancy hat. I say fancy things like 'I'll have a tuna sandwich on a croissant!'" Clinton responded, "I've never told anyone this, but you know the presidency? I really, really want it."

Finally, the encounter ended the only way it could—with a beautiful waltz. And seriously, this dance was delightful, full of dips and flourishes. Clinton led, of course, and the two candidates danced out of the bar and through the studio, past the audience and the other cast members, until Clinton shoved an unsuspecting Sanders into an elevator that would carry him far, far away.

"Well that was fun while it lasted," Clinton said, pivoting back to the camera, and ready to pivot to the general election.

It was a perfect cold open for the season finale. When SNL returns in the fall, the political landscape is likely to look very different. Here's hoping the show's writers are prepared to take on all the craziness that the general election is sure to send their way.