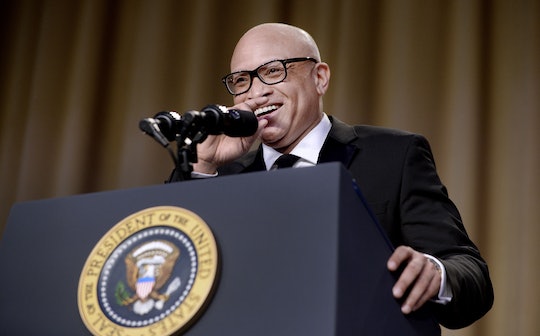 When Larry Wilmore spoke at the White House Correspondents' Dinner on Saturday night, nobody was safe from his hilarious (and sometimes vicious) jabs. The host of Comedy Central's The Nightly Show roasted President Obama, the press, and, of course, Donald Trump — and the room did not always react kindly. While some of Wilmore's funniest jokes at the White House Correspondents' Dinner were greeted with laughter, others sparked audible gasps, groans, and a few boos, leading Wilmore to mutter at one point, "You guys are tough, man."

While Wilmore clearly respects Obama, and even ended his speech with a heartfelt acknowledgement of how much Obama's presidency has meant to him as an African-American, he also wasn't afraid to call the president out with jokes like, "I saw you hanging out with NBA players like Steph Curry, Golden State Warriors. That was cool. You know, it kind of makes sense too, because both of you like raining down bombs on people from long distances," and "I just got a note from the president saying that if you want another drink you should order it now because the bar will be closing down. Of course, he said the same thing about Guantanamo so you have at least another eight years."

Obama bore Wilmore's jokes with a good-natured smile, but the members of the press were less receptive when the comedian turned his attention to them. His digs at Brian Williams and Wolf Blitzer ("Speaking of drones, how is Wolf Blitzer still on television?") left most audience members stone-faced, and his bit about MSNBC ("which actually now stands for ‘Missing a Significant Number of Black Correspondents’. . . MSNBC got rid of so many black people, I thought Boko Haram was running that network.") met with similar poor reception. Everyone was able to get into a little bit of C-SPAN mocking, with Wilmore saying, "C-SPAN, of course, is carrying tonight’s dinner live. . . Which is ironic because most of the viewers are not. It is true, guys. C-SPAN is the number-one network among people who died watching TV and no one's found them yet." But when Wilmore dug in on CNN's Don Lemon, calling him an "alleged journalist," Lemon gave him the finger from the audience. Don't worry, though, the two of them made up.

Wilmore transitioned into safer territory by mocking the candidates currently running for president. After all, who doesn't like a good joke about Trump? Wilmore had plenty of those in his back pocket, along with jabs at Ted Cruz, Chris Christie, Bernie Sanders, and Hillary Clinton:

I can’t understand why everybody treats Donald Trump with kid gloves. Then I realize they’re the only gloves that will fit his stupid little baby hands.

Chris Christie was supposed to be here tonight. I don’t know if he made it. He RSVPd for three: He, his wife, and Donald Trump’s dry-cleaning.

Hillary [Clinton] was flustered when a Black Lives Matter protester challenged her. I haven’t seen a white lady that upset over being blindsided by a black person since Kelly Ripa.

Bernie Sanders is so old, his first campaign slogan was "Fire."

While some may have felt Wilmore's speech was uncomfortable and overly-harsh, others applauded him for his truth-telling — even if not everyone was ready to handle the truth.