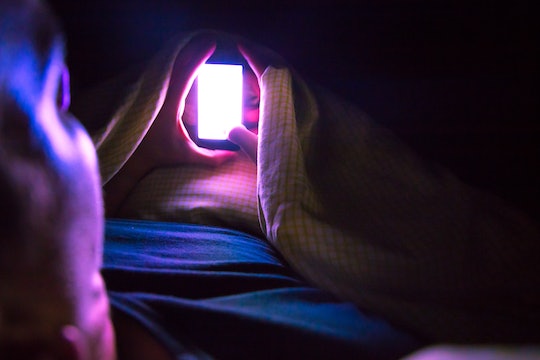 Can The Light From Smartphones Affect The Quality Of Sperm? Possibly...

Who doesn’t scroll through their phone right before bed? For many, it's a time to catch up on the news, take a mental break from the stress of the day, watch that silly YouTube video your buddy texted you hours ago, and just zone out. But one new study suggests that if you’re trying to get pregnant, you might want to tell your partner to put down their mobile device as the clock ticks into late evening. A new study has found a possible correlation between electronic media use at night and poor sperm quality.

Overall sperm count is on the decline in men. In 2018, Hebrew University and Mount Sinai medical school published a study showing that "sperm counts in the U.S., Europe, Australia, and New Zealand have fallen by more than 50 percent over the past four decades," as reported by GQ magazine.

To deduce whether or not increase in technological use could be a plausible cause to this decline, researchers at the American Academy of Sleep Medicine asked participants who were undergoing fertility evaluation to complete questionnaires about their sleep habits and use of electronic devices. Semen samples from 116 men between the ages of 21 and 59 were collected and analyzed. The conclusion from the study: Light from digital devices could be associated with sperm decline.

It is well known that light emitted from electronic screen devices suppresses melatonin secretion, Dr. Amit Green, head of research and development at the Sleep and Fatigue Institute at the Assuta Medical Center in Tel-Aviv, Israel who led the study, says in an email to Romper. "Melatonin’s 'reproductive' role in seasonal breeding animals is well-established. However, a growing body of evidence suggests melatonin might have a significant effect on human male reproduction as well,” says Dr. Green.

To determine the study's results, Dr. Green’s team looked at the participants' sleepiness and tiredness, using the Karolinska Sleepiness Scale (KSS), as well as sperm quality, mobility, and count.

His advice: “People in general and especially people undergoing fertility treatment should not use digital media devices two hours before desired sleep time.” And using that time to catch a few extra Zzzs can be good for a male's reproductive health. “We demonstrated a positive correlation between sleep duration and sperm total and progressive motility. A significant negative correlation was observed between subjective sleepiness and total and progressive motility, as well as total motile sperm number. Thus, people should sleep 6-8 hours in order to keep healthy way of life.”

But fertility expert Dr. Ryan Smith, a urologist who works in the Male Reproductive Medicine and Surgery department at The University of Virginia Health flags that there are many variables to consider. "Correlation does not imply causation," says Dr. Smith. The truth is, science has shown that infertility is the result of many factors from environment to diet, previous illness to things like smoking. "You can't pin it on any of those things directly," explains Dr. Smith. "Our bodies are facing an environmental toxin burden that is higher than ever. That takes a toll."

It's also important to note that only one semen sample was used from each participant, and semen changes from day to day. "Each time a man gives a semen analysis, it's not always the same," says Dr. Smith. That's why fertility doctors always use at least two samples to begin studying a person's fertility. Add to that the fact that men's sperm cycles are generally 70 days long with huge variety within that time.

Then there's the issue of self-reporting. Dr. Smith says, "questionnaire and survey based studies inherently are challenging to interpret because there are so many factors involved in terms of how patients are going to answer. It's never going to capture enough data for you to say something convincingly."

For Dr. Smith, more than anything, the study highlights the importance of sleep. "I think sleep is highly important for overall health, which should be recognized more and more where it can impact things like reproductive hormones," he says. The data here, he says, is more convincing. "Most profoundly, we you see that in individuals who work nightshift sometimes where it really has significant disruption of hormones in that setting."

What all of this boils down to for Dr. Smith is to approach all information on fertility with healthy level of speculation and instead focus on overall health.

"Our reproductive health is really kind of a barometer of our overall health," he says. And the way things are looking, with diminishing sperm counts and declining birth rates, per the Centers for Disease Control & Prevention, perhaps we shouldn't just be thinking about our own fertility and the habits that affect our reproductive health, but the next generation's as well.

Dr. Amit Green, head of research and development at the Sleep and Fatigue Institute at the Assuta Medical Center in Tel-Aviv, Israel