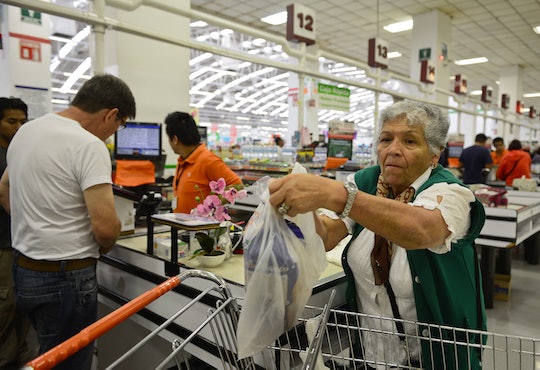 Latina Equal Pay Day Is Nov. 1 — Here's Why It's So Important To Understand

Wage disparity isn't going away any time soon, that's the bad news. The good news is, there are people in the world who are paying attention and trying to make a difference. Latina Equal Pay Day is Nov. 1, and the reason behind the date might surprise you; Nov. 1 represents how long it takes a Latina woman to earn the same amount as a white male counterpart from the previous year. In other words, it takes a Latina woman 22 months to earn the same money that a white, non-Hispanic male earns in 12 months.

According to new information released by the Institute for Women's Policy Research, the average Latina woman earns around 54 cents for every dollar a non-Hispanic male earns. And that number has worsened considerably since 2004; Median earning for full-time, year-round Hispanic women has dropped 4.5 percent annually since 2004, nearly triple the amount of women's overall earnings which dropped by 1.6 percent. If this trend continues, Hispanic women might be waiting 232 years to see wage equality. Which means that Hispanic women could be enjoying the same wages as their non-Hispanic male counterparts as early as the year 2248.

According to IWPR President and economist Heidi Hartman, that is clearly unacceptable:

If we wait for the wage gap to close itself, Hispanic women will have to endure more than two more centuries of pay inequality. That’s certainly much too long to ask of them and the families who rely on their earnings to make ends meet.

Latina women continue to struggle the most with the wage gap; White women could make as much as white men by the year 2056 and Black women could see wage equality by 2124. Which is still dire, but considerably better than the wage gap faced by Latina women.

IWPR has made some recommendations to help decrease the unfortunate wage gap for Latina women:

President Hartmann of the IWPR noted,

The good news is that there are several policies that we know will help narrow the gap for Hispanic women. By improving the quality of lower wage jobs and expanding access to post-secondary education and better paying jobs, we can speed up progress for all women, and especially Hispanic women.

There is a reason why #LatinaEqualPayDay is taking Twitter by storm — because wage disparity is a universal human problem. And as actual humans, we're supposed to want the best for each other.