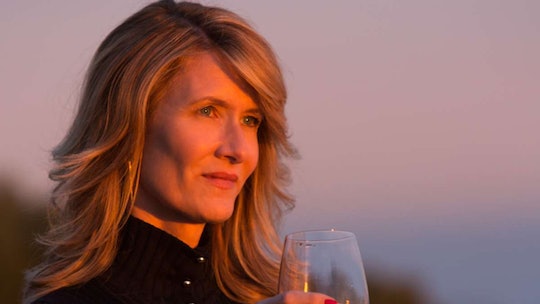 I was just 5 years old when Jurassic Park was released, soon to become an integral part of my childhood. And while the movie is full of shocking moments (still not over that scene in the kitchen with the velociraptors), the one part that still makes me almost cry with excitement? Laura Dern, as badass paleobotanist Dr. Ellie Sattler, clambering out of the top of the jeep, and yanking her sunglasses off her face as she takes in a field of dinosaurs — her life's work there in front of her. It never occurred to me that a woman couldn’t work in science, lead a rescue mission, or save a sick triceratops when the men couldn't. It's part of Dern's legacy — a legacy that she's continuing to build as she fights to close the gender pay gap so that our daughters will know for certain that women can dominate in typically all-male fields, and be paid the same for it, too.

"I believe it is our ultimate job requirement as mothers to make our children, the next generation, not have to be fighting for these issues, which ultimately seem like the minutia," Dern tells me over the phone. "It's so obvious it should have changed so long ago — but if we get things out of the way, they can take care and heal the planet that we've left them to adopt."

They being our children. They being the little people we're raising. They being the kids that were just like me — taking to heart the messages about equality, environmentalism, and ecological balance hidden in our favorite movies and TV shows.

I hope we are leaving them the legacy of, less of a long list. The things they have to fight for.

Dern knows the impact her privilege and her work has on this fight. She worked on Wild, the first project from Hello Sunshine, the production company Reese Witherspoon started with the goal of telling female-led stories, and later of course joined the cast of Big Little Lies, playing Renata Klein, a dedicated mother and high-flying careerist who challenged our ideas about villainy. At times, her role is art imitating life. When talking about her working with so many empowering women on the show, she says they are with "great, good fortune doing a job that involves not being silenced anymore. That's the theme of the show — how to have self respect and use your voice and not be silenced."

Last year, as news of Big Little Lies season 2 began, another announcement was made: the cast received "significant pay increases," from season 1, reported ABC. The president of programming for HBO, Casey Bloys, told The Hollywood Reporter that Time's Up — the female empowerment movement founded in 2018 by several entertainment icons to directly combat sexual assault, harassment, and workplace inequality across industries — was the motive behind the heftier paycheck.

Importantly, Dern describes Time's Up as a "whistleblower" movement. It's clear she has no interest in staying silent either.

According to the American Association of University Women, the current gender pay gap sees women paid roughly 20 percent less than men in a year. To illustrate just how egregious this is, Dern produced a video for "Nut-rition" in which a supermarket is stocked with "His" and "Hers" bags of mixed nuts, with bags of "Hers" containing 20 percent more product for the same price. Male shoppers who attempt to purchase the much better value bags of nuts-for-her are absolutely irate at the cashier when they are told they can only buy the bags with 4/5 the amount of nuts. And I mean, irate.

It sounds so simple, and yet the men just can't deal. Why should they, right? Why should anyone be treated differently?

This is what Dern wants to change for her daughter. "I hope we are leaving them the legacy of, less of a long list. The things they have to fight for. That they will have a safe workplace environment where they can hold deep self respect, not experience abusive power, and are paid equally for the work that they do in a community that reflects what America says it represents."

Dern tells me about her hope for the girls watching these changes unfold — she wants them to see "immense diversity, immigrants, people of color, and men and women standing together, working together in a community to make a difference in their workplace environment, for their next generation. To feed their children and to support and lift them up."

It's the dream. It's what we all want for our children, and it's what Dern's mother and grandmother wanted for her.

While she agrees that the feminist roles she has portrayed in her stellar career — Renata Klein on Big Little Lies, Dr. Ellie Sattler in Jurassic Park, Diane Evans in Twin Peaks — have helped to inspire her work ("I think the issues at hand inspire the roles we take on, and maybe even the content we try to create," she tells me), she also acknowledges her own upbringing and the inspiration of her mother and grandmother — inspiration that has carried into the next generation. "As my mom says to my turning-14-year-old daughter all the time, 'Jaya, we're just raising you to kick dirt!'" Dern laughs.

"My daughter is a proud public speaker at 14. She marches as what she feels is part of her job as an American and a student. She gets loud and she won't stop until any issue is felt that it is fairly protected with equality and awareness in this country," says Dern. "It's a very exciting generation, and she's not an anomaly. That's her and all her friends."

Dern is both a witness to and sign of progress, and she understands the hurdles to reaching parity. "The comment I often hear is, 'Well, she doesn't have as experienced a resume,'" she explains of trying to achieve gender equity among production staff. "She may have the same gift, or a unique gift, she may have an equal education — but she's got less experience in that job 'cause she couldn't get that job," Dern says, "for years. What I say to that is, they need us now and they didn't before. They need women. They need their numbers to look impressive to their board room because it matters."

Raising children is hard, but Dern's commitment to changing the world we leave behind for our sons and daughters makes it a little easier. It's why, Dern tells me, so many women are stepping up to take on boss roles, why they're creating these communities and tribes within their workplace of empowering women. It's why the group text she has with her Big Little Lies costars is so important to her.

"We have each other's back. We're friends, we educate each other about different things, different interests, pieces of news. And it's exciting and new for us because we've all been isolated for years. We didn't have a tribe. We had our girlfriends, but we didn't have a tribe in the workplace. That's been remarkable. That's our experience in our workplace environment."

Up until the season finale of Big Little Lies, Renata is seen as the villain. She's a bully, she thinks she's better than the other moms, she's unapologetic at even her most stubborn moments. But at the end of the season, it all makes sense — Renata is just a woman trying to protect her child. She's teaching her to be loud, to stand up for herself at whatever cost.

And that's what Dern is doing, too. It doesn't matter what anyone else thinks of her actions — they are backed by the love for her children. The love for all of our children.

May we all have a little Renata Klein in us — may we have the will and power to make a lot of noise and blow the whistle when it really counts.