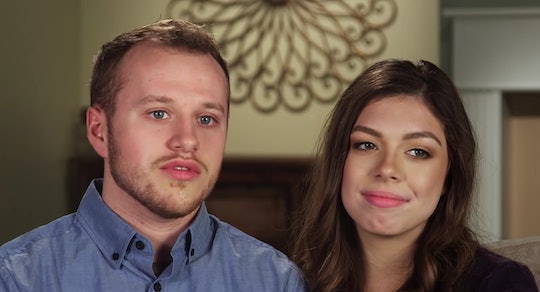 A few weeks after welcoming their daughter, Bella, Josiah and Lauren Duggar's little girl is starting to really resemble one of her parents. Well, at least according to some Counting On fans. While the TLC couple's Instagram followers can't stop gushing over Lauren Duggar's adorable new photo with baby Bella, they've also pointed out that she might just be her dad's mini-me.

Josiah and Lauren welcomed their daughter on Nov. 8, and have been so smitten with their family's newest arrival ever since. In their announcement on Instagram, the couple wrote that they're "so thankful for God blessing us with such a healthy baby girl". That same sentiment has been clear over the past few weeks with every Instagram posts they've shared of their daughter. Like this weekend, when the family of three got out of the house for a simple outing to Dickson Street in downtown Fayetteville, Arkansas.

"With the weather in the low 60's today, it was the perfect time to take a stroll downtown with my girls," Josiah captioned the post. "#windowshopping #familystroll #lovemyfamily #itsbeginningtolookalotlikechristmas."

In the photo, Lauren can be seen holding Bella against her chest and smiling down at her. Meanwhile, Bella looks so blissful wearing a green velvet bow and a huge smile on her face in her mom's arms. In the second shot in the series, both Josiah and Lauren look so happy while posing for a casual selfie.

Not only do their followers think their little girl is so cute, they also can't get over how much she resembles the Duggar side of her family. "Looks like dad," one commenter wrote, while also added, "She looks just like you Josiah!"

Others however, think she looks a lot like Josiah's youngest sister, Josie Duggar, who turns 10 on Dec. 10. "Beautiful!," one commenter wrote. "She looks just like Josie." Another stated, "All Duggar."

Baby Bella's big smile in the couple's new photos of her isn't just for fans. The couple recently told Us Weekly that Bella has brought so much joy into their lives since her birth. "We are obsessed with her adorable smiles," they said. And after seeing these new snaps, it's easy to understand why. And as time passes, it'll be fun to see if those Duggar genes are as strong as they seem to be.