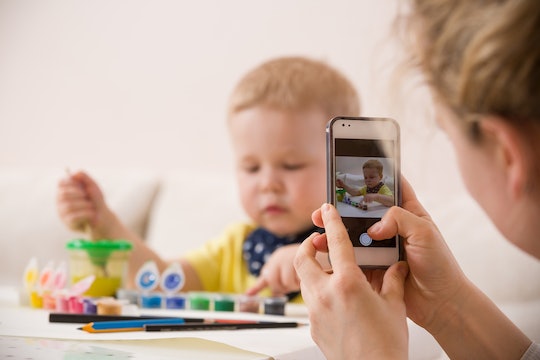 With social media being as widespread as it is nowadays, it's common to see pictures of babies and children on pretty much every social media platform. Not only do parents snap pictures of their little ones constantly, but children often have their own Snapchat accounts, Facebook profiles, and Instagram feeds, too. With a new privacy horror story popping up every day in the news, though, parents are forced to walk a line between sharing cute moments and protecting their kids. Wondering what legal rights you have? There's at least one law that protects your kid's photos from being stolen online, and you should know exactly what it does and doesn't do.

The Children's Online Privacy Protection Act is a federal law that outlines guidelines for companies to help protect children's privacy when they go online. COPPA is the reason why children's apps require parental consent for any kids under age 13, and — according to HuffPost — recent updates made to the law in 2013 mean companies can't collect the following from any devices associated with a child's account:

To get parental consent, companies must explain exactly what data they collect and how it will be used, and the COPPA rules apply to any gaming platforms, apps, websites, and social media networks that allow users under 13 to join.

The problem, of course, is that these laws only protect kids on sites aimed at kids under 13. If a parent is the person sharing their child's information or pictures, or if a child gets onto a website or app by pretending they're over 13, COPPA no longer applies. And that's important to note, because according to one 2010 study by online security company AVG, 92 percent of American kids have an online presence before they're even 2 years old. And an estimated 7.5 million kids are also on Facebook before they've hit 13 years old, according to Consumer Reports.

So how do you protect kids' photos from being stolen if COPPA no longer applies? There are certain ways that the law can help you get photos taken down once they've been stolen, but it's generally easier to use very protective privacy settings on social media and set clear rules with your children to ensure those images never get out in the first place.

When you post anything online, does not matter where it is, you have lost control of it. Over-sharing parents are a concern because they have no idea about where these [images] go. ... It does not matter how innocent the photo is, if your child has got what a predator is looking for, they will take that photo.

Even if your child's picture isn't used for more nefarious purposes, you can report a stolen picture to Instagram or Facebook if you see it on a stranger's account. Both social media websites have told media outlets that such content violates their terms and conditions and will be removed if reported by parents or guardians.

Once it's out there, though, it's much harder to undo the damage done — so parents' best recourse is to make sure that, if they're sharing images of their children at all, that they do so carefully, to only a select group of people, with carefully reviewed privacy settings.

Laws haven't necessarily caught up to the times, and the internet can be a difficult place to track down predators in real life, which makes a defensive approach the best one.