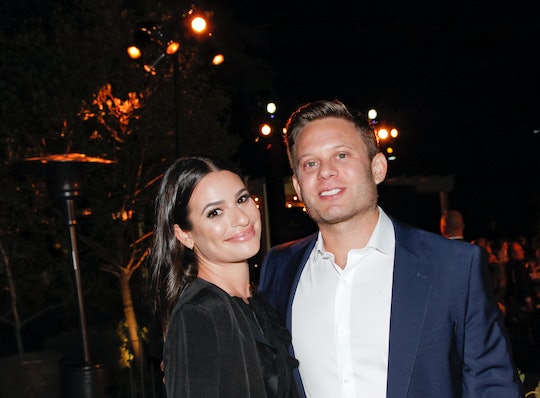 Roughly four months after announcing her exciting pregnancy news, Lea Michele has given birth to her first child, according to multiple media outlets. The Glee alum and her husband Zandy Reich reportedly welcomed a little boy with a truly sweet and unique name.

People and E! News have both reported that the actress gave birth on Thursday, Aug. 20 to a son the couple named Ever Leo. "Everyone's happy and healthy, and they're extremely grateful," a source told People. "[Ever's] been an easy baby so far."

While the new parents haven't explained the significance behind their little boy's name, the moniker Ever has Hebrew and English origins, according to Parents, and means eternity or beyond. His middle name, Leo, means "lion" in Latin, according to NameBerry, but could be a reference to his Zodiac sign. Since Ever was born on Aug. 20, he was born during Leo season. Leos are natural leaders, popular among their friends, and are protective, according to Cosmopolitan.

While Michele's representative has not responded to Romper's request for comment regarding the reports, the first time mom and her baby are "doing very well," as E! News reported.

A source told E! News that while Michele has not made a public statement, she has shared her exciting news with those close to her. "Lea has been inundated with well wishes and sharing updates with her family and a close group of girl friends," a source told E! News.

The first-time mom confirmed her pregnancy in May after it was reported in April that she was expecting her first child. "So grateful," she captioned her first photo of her bump on Instagram.

Michele and Reich got engaged in April 2018 before tying the knot in March 2019. "We are so excited to be married and grateful to be surrounded by our friends and family," the couple told People in a statement at the time. "And most of all, we're happy to spend the rest of our lives together."

Throughout her pregnancy, Michele had been keeping details about it relatively quiet, occasionally taking to social media to post a photo of her growing bump in the days leading up to her son's reported arrival. So, who knows? Perhaps she'll post a few photos of her little one now that he is finally here.