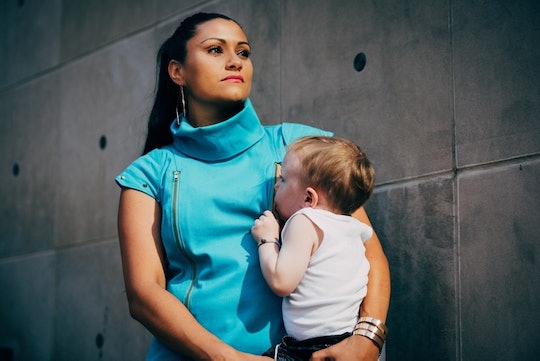 I felt like a total bad*ss while nursing my daughter. But the minute I was out in public, I felt exposed, nervous, and insecure. Nursing tanks can only do so much, right? (Plus, they weren't always the most stylish options.) My story isn't unique — so many breastfeeding mothers feel the same way, which is exactly why Leche Libre, a clothing line for breastfeeding moms, is going to change everything.

"It's problematic. You have a baby, your life completely changes, and then you have to wear clothing that doesn't represent who you are," Andrea Newberry, designer and creator of Leche Libre, tells me during a phone call. "It's just another step of losing yourself in the process of becoming a mom."

Newberry's line of breastfeeding clothing is more than just functional — it's stylish. "My clothing meets the needs of women who don't necessarily define themselves as mothers — they are [simply] women with children. I'm trying to create a line of fashion that is edgy and powerful so these women can feel like themselves and channel their inner strength to represent themselves through fashion."

Her clothing is designed with the breastfeeding mother in mind. With easy zippers to give you access to your breasts, it's giving women the security and confidence they need to breastfeed in public without fear. "I get so many comments from people about how discreet the clothing is," Newberry says. "I didn't personally struggle with breastfeeding in public, but I know some women do and they are looking for clothing that gives them confidence and makes them feel empowered. My main objective is to make women feel more powerful so they can channel that power to go against cultural norms so they can do what's best for them and their children."

They say art mirrors life and that seems to be the case for Newberry. Before creating Leche Libre, she was a stay-at-home mother of two, feeling sucked into her role. "I lost my sense of who I was as an individual," she says. "I wanted to do something for myself to make me feel like myself again. I adjusted a pattern to put zippers in the bust so I could wear it all the time, even while breastfeeding, and I got so many compliments on it. I was always a maker, but after hearing everyone's opinion, I decided I wanted to do it. I wanted to go for it and make Leche Libre. I decided I was going to pick it up because it would make me feel like I was doing something valuable and important."

Newberry's clothing line is a lot like her own personal struggle — it's all about retaining who you are while still being a mother. And the power she infuses in the clothes? It's a must for any mother, especially those who may have suffered through postpartum depression like Newberry. "I was depressed. You know, everyone talks about self-care, but it's a really hard thing to actually commit to and do. When you become a mother, you give up everything. You have to take care of everyone else — you're the nurturer. I realized that I need something for me," she says. "It didn't cure me of my postpartum depression, but it was the ladder that helped me climb out of the hole."

Newberry's struggle isn't unique and she hopes her clothing line can also be a ladder for women who are suffering from identity loss, insecurities breastfeeding, or just fed up with the mainstream clothing options for breastfeeding mothers. "All of my pieces are there for different reasons. They are there to represent a full wardrobe for a breastfeeding woman," she says. "Working moms, especially, don't want to invest a lot of money in clothing catered to breastfeeding, but our pieces are so versatile that they range from funky, like the Zipper Tunic ($120), to sophisticated, like the Little Blue Dress ($110)."

Everyone has a chance to feel empowered and strong as a breastfeeding mom with the Leche Libre collection. Newberry's Kickstarter campaign has already surpassed its goal of $20,000, and she's preparing to produce larger production runs so she can offer wholesale prices. "It's just me, I'm a one-woman show," Newberry says. "But I want to diversify the sales and empower even more women."

Because breastfeeding babies changes everything — but it doesn't have to change who you are.