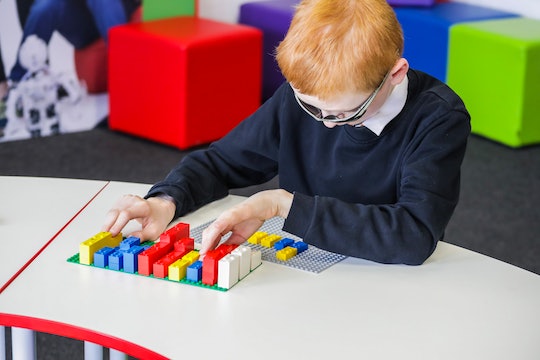 While the old adage about parents needing to learn how to walk across a floor filled with tiny LEGO pieces without squealing and waking up a sleeping baby may be true, after hearing the news that the LEGO Foundation and LEGO Group have developed LEGO Braille Bricks, I may never complain about stepping on a LEGO piece again. That's right, kids with visual impairment can now learn how to read Braille by playing with their favorite building blocks.

Each LEGO Braille Brick is marked with studs representing letters and numbers of the Braille alphabet. According to the company's press release, the LEGO Braille Bricks will be compatible with standard LEGO sets as well as marked with the corresponding printed letter or number in order to facilitate inclusive play amongst children and allow sighted teachers to interact with blind or visually impaired students. The complete LEGO Braille Brick kit, set to officially launch in 2020, will contain approximately 250 bricks containing a full alphabet, numbers 0-9, as well as some math symbols.

Romper spoke with LEGO Group senior art director Morten Bonde, who helped consult on the design of LEGO Braille Bricks. Bonde has a genetic eye disorder that is causing him to go blind gradually. His inspiring attitude and hands-on approach to helping develop LEGO Braille Bricks has included providing input on color choices, font size and type, and he will soon help design packaging, apps, and a website for the product, drawing on his own experiences as a visually impaired person.

"Every day I see the world through a keyhole. I slowly lose my vision and besides my job at the LEGO Group, I give lectures on how I transformed myself to be able to see possibilities instead of limitations," Bonde says. "When I was contacted by the LEGO Foundation to function as internal consultant on the LEGO Braille Bricks project, and first met with Stine Storm (LEGO Braille Bricks Project Lead, LEGO Foundation), where she showed me the Braille bricks for the first time, I had a very emotional experience. While Stine talked about the project and the blind children she had visited and introduced to the LEGO Braille Bricks, I got goose bumps all over the body. I just knew that I had to work on this project. It was almost a call!"

According to the LEGO press release, the World Health Organization estimates that 19 million children worldwide are vision impaired, and of those, 14 million have irreversible blindness. In the United States, The National Federation of the Blind reports that only 10 percent of blind children are currently learning to read Braille, as opposed to 50 percent in the 1950s. This dramatic decrease is due in part to the increased use of audio technology assistance for visually impaired persons, but the development of the new LEGO Braille Bricks hopes to re-introduce the importance of Braille learning for students who are visually impaired.

"With thousands of audiobooks and computer programs now available, fewer kids are learning to read Braille," said Philippe Chazal, Treasurer of the European Blind Union in a press release. "This is particularly critical when we know that Braille users often are more independent, have a higher level of education, and better employment opportunities. We strongly believe LEGO Braille Bricks can help boost the level of interest in learning Braille, so we’re thrilled that the LEGO Foundation is making it possible to further this concept and bring it to children around the world."

LEGO Braille Bricks are currently being tested in multiple languages including English, Portuguese, Danish, and Norwegian, and will also be tested in French, Spanish, and German later this year. By 2020, the final LEGO Braille Brick kit is expected to launch and LEGO plans to distribute kits free of charge to selected partnering institutions.

The development of LEGO Braille Bricks is a huge step in the ways of inclusive play and LEGO is leading the way in ensuring that all kids can learn through play, regardless of their level of sight. According to Bonde, this could be a true game-changer for blind and visually impaired children.

"I want to help all blind and visually impaired children in the world dare to dream and see that life has so much in store for them. When, some years ago, I was hit by stress and depression over my blind future, I decided one day that life is too precious for me not to enjoy every second of," Bonde says. "I would like to help give blind children the desire to embark on challenges, learn to fail, learn to see life as a playground, where anything can come true if you yourself believe that they can come true. That is my greatest ambition with my participation in the LEGO Braille Bricks project."