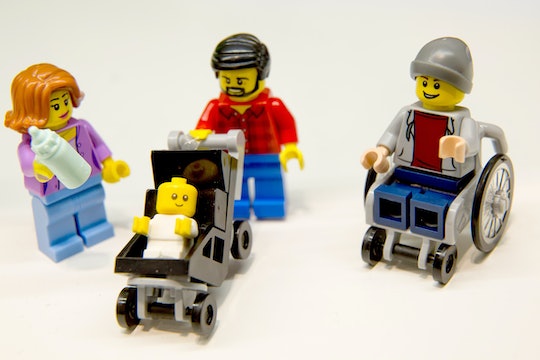 Lego Has Released A Stay-At-Home-Dad Figure, & It's A Huge Step Forward

Even though many parents these days are choosing to ignore traditional gender roles in favor of more balanced ideas about shared parenting and work, taking a short walk down any random toy aisle in America will prove that the majority of toys are still super traditional in terms of their boy-girl gender divide. Although it is getting a little bit easier to find toys designed for girls that aren't a total pink vomit explosion focused solely on fashion or domestic tasks, finding so-called "girl toys" for boys is still a struggle. The good news? According to Slate, Lego has finally come up with one important solution to bridge the gap: a stay-at-home-dad Lego figurine.

According to Pew Research, more dads than ever are staying home to raise their kids these days, but you wouldn't know it from the toys their kids play with — toys like baby dolls, kitchen sets, and brooms and vacuum cleaners based on real-life items that plenty of little boys would see their dads using on a regular basis are most often still relegated to the pink and frilly world of little girls. But with Lego's new City collection, kids can have a toy that looks at least a little bit more like what they see at home. The stay-at-home-dad figurine, for example, is a masculine-looking, bearded, stroller-pushing papa (who looks pretty hipster lumbersexual actually, which couldn't possibly be an accident). The mom in this Lego household, on the other hand, gets to be the one donning work attire.

As Slate aptly noted, the change-up in the Lego figurine lineup will give children a chance to "[imagine] a wider range of possibilities in terms of which parent is responsible for what" — not to mention that it also reflects different types of households, like ones where there isn't a mom at all, but two dads taking care of the children, or single dads who are the primary caregiver. According to Fortune, Lego Systems president Soren Torp Laursen said the move was Lego's way of "trying to portray the world around us and [listening] to our consumer base." Prior to the SAHD, Lego also released another progressive figurine to their City collection: a mini-figure in a wheelchair, according to USA Today.

That's not to say though that Lego's new releases have all been slam-dunk steps forward for gender acceptance. Fortune noted that their Lego Friends collection was heavily criticized a few years ago for being too stereotypically girly, featuring pink and purple blocks, and things like shopping malls and hair salons. But Lego's newest collection — along with other brands' new toys, like Mattel's headline-making new line of dolls reflecting different body types — is hopefully a sign of changing views about how toys should be created and marketed to reflect a broader reality of what life actually looks like for children growing up today. Sure, there aren't yet many toys that break the gender binary, but this move is still definitely a move in the right direction.