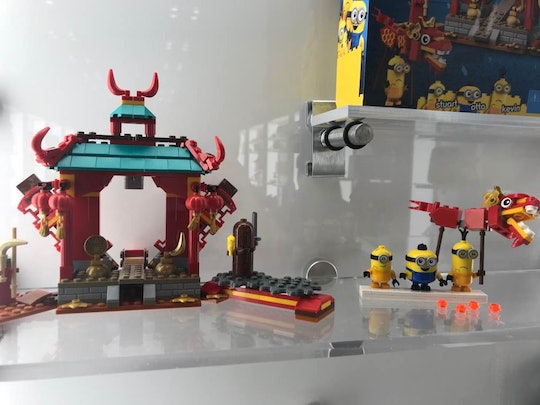 I think we can all agree that Minions, the yellow creatures that stole the show in Despicable Me, are already ridiculously cute. Now they’re about to get even cuter with the arrival of the new LEGO Minions sets. That's right: To celebrate the latest addition to the Minion movie franchise, Minions: The Rise of Gru, (set for release on July 3, 2020), LEGO will be launching Minion-themed sets this April. (Which isn't nearly as far away as July, thankfully.)

If you’re not sure what species minions are, then, well, I’m right there with you. What I do know is that they look like little banana-flavored candies (and they also love the fruit), they can turn into glow sticks when snapped, and no one is entirely sure what they’re saying. “They vary in height, but it's safe to say they're between 2 and 3 feet tall (though closer to 2),” per Vox. The LEGO sets are decidedly even tinier but they still pack a major Minion punch. There are five sets (ranging from $20-$50) to choose from, meaning Minion-lovers ages 4 and up can all get in on the action, even if they’re new to LEGOs.

The most ambitious set, known on the LEGO website as “Brick-Built Minions and Their Lair” is designed for ages 8 and up and comes with a whopping 876 pieces. Maybe you’re thinking that this means over 800 chances to take a LEGO piece to the foot (the actual worst) but hopefully their bright yellow color will make it easier to spot the little bricks on the floor. (You can always hope.)

Younger LEGO-lovers will have fun with the Minions in Gru’s Lab or the Minion Pilot in Training sets, while kids who can't get enough of vehicles will be psyched to see the Unstoppable Bike Chase Set.

Kiddos can also build scenes from the movie with the Minion Kung Fu Battle which “lets kids role-play epic Chinese New Year scenes at the temple,” per LEGO’s website.

All five sets are set to be released on April 27, 2020, and Minions fans new and old are sure to go ba-ba-ba-bananas for them. Who knows? They might even hatch a scheme to take over the world...

At the very least, you can probably expect these LEGOs to take over your house. (Which wouldn't be the worst thing ever.)