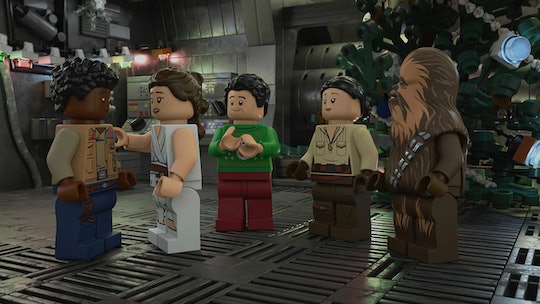 For anyone who was worried about how in the world they would celebrate Life Day this year, there's a new LEGO Star Wars Holiday Special on Disney+ set to drop on Nov. 17. Which, as anyone who watched the original made-for-TV Star Wars Holiday Special in the '70s can tell you is Life Day. Also they can tell you that it was one of the most bizarre television experiences of a lifetime and that recreating it is sort of brilliant.

George Lucas was apparently so upset about the variety show set on Chewbacca's home planet of Kashyyyk (where Golden Girls' Bea Arthur makes an appearance singing to a huge rat, for instance), Mark Hamill quoted the director once saying if he could "find every copy of that holiday special, I'd smash them with a hammer," according to Business Insider.

Much like the original holiday special, this time around the Star Wars characters are on Kashyyk getting ready to celebrate Life Day, a Wookie holiday that appears to be somewhat like Christmas, while Rey goes off an an adventure of her own to delve deeper into the Force with BB-8.

Her adventures take her on a timeline-traveling adventure through different Star Wars' stories, and she has to try to make it back to celebrate Life Day with her pals. Will she pull it off? Fans can find out on Disney+ on Nov. 17.

According to Entertainment Weekly, several of the original actors will be voicing their own characters for the LEGO Star Wars Holiday Special including Anthony Daniels as C-3PO, Kelly Marie Tran as Rose Tico, and Billy Dee Williams as Lando Calrissian. This is actually the second Star Wars holiday special Daniels has been in, as the original featured members of the original cast from the first Star Wars movie including Hamill, Carrie Fisher, and Harrison Ford.

LEGO Star Wars Holiday Special executive producer James Waugh told Entertainment Weekly, "Daniels did joke around with us that he couldn't believe he was doing yet another holiday special. He never thought he'd be doing that again."