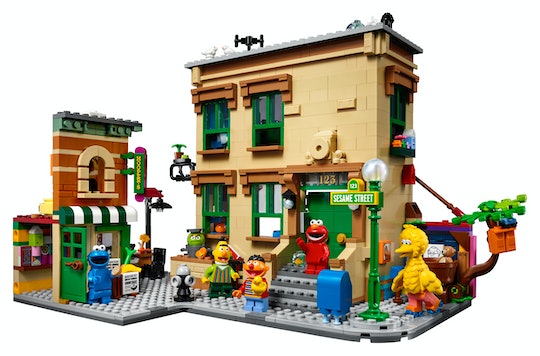 It’s hard to believe that there’s never been a Sesame Street LEGO kit. The iconic brands that have captured the imaginations of children for years seem like a natural fit. But it took an avid builder to conceptualize the classic TV series in its most buildable form for the two to come together. Now, on November 1, shoppers can purchase the ultimate marriage of these beloved kid brands with the all-new LEGO® Ideas 123 Sesame Street set.

The latest addition to the LEGO Ideas collection, the 123 Sesame Street set depicts the former PBS show (now HBO program) in all its nostalgic glory. All of our favorite characters are there: Big Bird, Cookie Monster, Elmo, Bert, Ernie, and, naturally, Oscar the Grouch. But even better, the set is designed to look and feel just like Sesame Street did when you were a kid. Remember the thrill of hearing that classic '70s jingle as children in bell bottoms and poly-blends ran around an urban playground? The classic New York City streetscape features everything from Bert and Ernie's apartment to Big Bird’s nest! There’s even Hooper’s store and Oscar’s garbage can.

The masterwork is the brainchild of Sesame Street fan and LEGO enthusiast Ivan Guerrero.

“As a long-time fan of the LEGO Group and Sesame Street, it has been a dream come true to be able to merge my two passions into a memorable set for fellow builders to enjoy,” says Guerrero in a press release from LEGO. “LEGO bricks and Sesame Street shaped both my childhood and adult years, and the opportunity to work with the LEGO Ideas team to bring this quintessential New York street to life has been thrilling.”

LEGO VP of Global Marketing, Federico Begher, says Guerrero’s idea was an easy sell. “Knowing the impact Sesame Street has had on the world for decades, sharing similar values with generations past and present, this felt like an exciting way to blend novelty with nostalgia, and pay homage to the truly iconic 123 Sesame Street through LEGO Ideas.”

Of course there is one tiny buyer beware: the $119.99 123 Sesame Street is a whopping 1,367 pieces. If you’re buying this for a kiddo under the age of 5, prepare to lend a helping hand (or 10). But rest assured, it will be well worth the effort when you and your mini Sesame Street fan fall under the spell of the most magical neighborhood on TV. And if you mess up and have to start all over, just remember what Big Bird says, “Everyone makes mistakes, so why can’t you?”