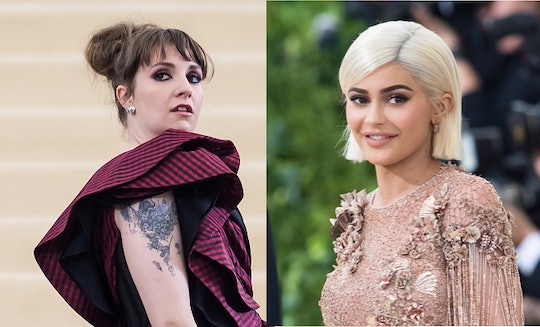 When TMZ and People first reported that Kylie Jenner was pregnant with her first child on Friday, everyone had a different reaction to the news. Once the initial shock wore off, some people were happy for the 20-year-old reality star, social media maven, and beauty mogul. No matter what kind of emotions you felt, Lena Dunham has a message for people "triggered" by Jenner's reported pregnancy, letting everyone know that its OK to feel something about the news.

People had a lot of interesting things to say about the reported pregnancy on Friday — everything from saying the pregnancy was a business move to implying that Jenner "trapped" her boyfriend, Travis Scott, by getting pregnant. Yeah, it was a lot. Romper has reached out to representatives for both Jenner and Scott for comment, but has not heard back yet.

But instead of feeling things about Jenner, some people were feeling negative thoughts about themselves. For example, Dunham's friends were "triggered" by the news. Dunham took to Twitter to talk her friend's feelings about Jenner's pregnancy, defending Jenner in the end. Dunham noted that people shouldn't be jealous that Jenner is reportedly pregnant because she's young and very "fertile."

Call me crazy, but Dunham's "support" of Jenner doesn't seem like much support at all. Pointing out that Jenner doesn't know about struggle because she is fertile and can afford to support her pregnancy and a kid at 20, this message comes off as a little condescending

But Dunham does make a pretty interesting point in the second part of her tweet. People need to stop pitting women against each other — or comparing themselves to other women — especially when their experiences are so different. Every woman's experience with fertility is different and depends on personal factors like health, age, and family history. Comparing your ability to get pregnant to someone younger than you, with completely different health factors shouldn't be a thing. Dunham does have a point — although it was kind of arbitrary for her to point out that Jenner can't legally drink yet.

People are entitled to their own reactions, but Dunham's friends really shouldn't compare themselves Jenner and be upset that she could very well be pregnant. After all, the average age of mothers in the United States is rising. The average age of a first time mom is 26, according to U.S. News & World Report, and the number keeps increasing. And according to Slate, women in their 30s are having more children than women in their 20s. Based on this, Jenner isn't a prime example of the average American mother.

It is completely normal for people to be triggered by Jenner's pregnancy, especially if they have been struggling to get pregnant themselves. Infertility affects 10 to 15 percent of couples, according to the Office on Women's Health.

When women have problems getting pregnant and are dealing with infertility, it does have an impact on their mental health. According to the World Health Organization, high rates of "depression and anxiety, suicidal tendencies, and a strong conceptualization of grief affects infertile individuals." When it comes to infertile couples, according to Massachusetts General Hospital, women show higher levels of stress in general than their male counterparts. Because of this, anything — from seeing a happy family to hearing a celebrity got pregnant (like Jenner) — can make women struggling to get pregnant feel upset or give them feelings of worthlessness.

But comparing yourself to Jenner isn't going to get you anywhere. She is a multimillionaire who made the decision to reportedly get pregnant at her age. So, although it made be difficult, it's important to remember that not everything in life, including fertility and having a baby, is a competition.