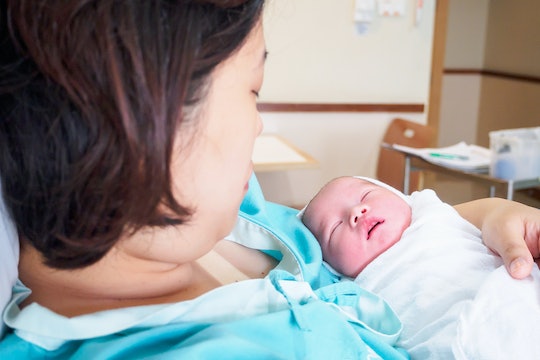 Moms: You Need to Have an Opinion on Circumcision, Too

First things first: I’m not going to tell you to circumcise your son or not. I have three boys, so I do possess a well-informed opinion about circumcision and I have put that opinion into practice each time a new baby boy was born into our family. But I don’t want to reveal which side of the circumcision debate I'm on, because that information would only be a distraction from what I really want to talk about: the surprising number of proactive, involved, and educated mothers taking a hands-off, “dad’s in charge,” not-my-business approach to the Great Circumcision Decision. Moms, you need to have an opinion on circumcision, too.

Go find an article on Facebook about circumcision. It doesn’t matter whether the article is for or against the practice, just find one that takes a stand either way. Now scroll down through the comments section. I guarantee that after only a minute or two, you’ll come across something like one of these statements:

“I left it up to my husband. I didn’t have strong feelings about it, but he did.”

“I let my husband decide about circumcision. I don’t have a penis!”

“I was/wasn’t comfortable with it, but my husband insisted and I didn’t want to fight.”

Hey, moms...are we for real with this?

Whether you are considering circumcision for religious, cultural or medical reasons, the choice should not fall squarely on the shoulders of men. Circumcision may be common in the U.S., but that doesn’t mean it isn’t still a surgical procedure with risks, and some benefits.

I’m not saying there aren’t any dads out there who ask questions or search for information or poll their coworkers for parental advice. But moms really do have a monopoly on the whole 'worrying endlessly about our kids’ futures' thing.

That makes circumcision a health issue, and just because that health issue involves a baby boy’s penis doesn’t mean it’s For Men Only. Both parents should have an equal say in their child’s health and well-being. Can you imagine any other pediatric surgical procedure being so casually passed off onto just one parent? Should we remove your son’s tonsils? I don’t think so, Doc but I’ll leave it up to his father to decide!

I know, I know: everyone has a pair of tonsils. But just because the anatomy in question here happens to be part of the male reproductive system does not mean a mother has to silently defer to her baby’s father. In fact, I would argue that not having a penis is one of the primary reasons why a mother should get involved.

The decision to circumcise is an important one; even if you are part of a religion that holds the procedure in high regard, it shouldn’t be made without careful consideration, consultation with a medical professional (or religious leader, if appropriate), and a reasonable amount of research into the advantages and disadvantages.

This is where, I think, letting dads call the shots on circumcision really misses the mark. Because let’s be honest — moms are the ones doing the majority of the information-gathering when it comes to our kids.

We’re the ones Googling symptoms and lying awake until 3 a.m. fretting about what we found. We’re the ones hitting up the internet forums to crowdsource for advice on what we should do about our kid’s weird rash. We’re the ones reading all the articles and essays on mommy blogs and parenting sites. We’re the ones filling out the developmental milestone checklists and registering for the monthly “what your kid should be doing right now” emails. We’re the ones dragging babies, toddlers, and big kids to the pediatrician’s office, pulling up a list of questions and concerns on our smartphones, and getting our doctor’s professional recommendations.

I’m not saying there aren’t any dads out there who ask questions or search for information or poll their coworkers for parental advice. But moms really do have a monopoly on the whole “worrying endlessly about our kids’ futures” thing, and as the popular Facebook meme saying goes, a worried mother does better research than the FBI.

That research has made us well-informed. It’s made us strongly opinionated. It’s made us confident enough to be vocally critical of parents who don’t share our views. It’s made us unafraid to ask questions, to challenge the status quo, to reexamine the social norms or family traditions and expectations that often influence us.

If we have the facts, why do we think we shouldn’t be allowed to use them? If we have the knowledge needed to make an informed, health-conscious decision about our child, why don’t we consider our own opinion to be just as valuable as a father’s?

I said I wouldn’t turn this into a debate about the practice of circumcision itself, and I also said I wouldn’t take sides. I’m keeping my word: I won’t tell you what I think, or what my husband and I chose for our sons. But I will tell you that we made that choice together, as equal partners. We examined the facts, we balanced the pros against the cons, and we made the best decision we could based on the available information.

Even if our sons grow up to disagree with our choice one day, at least my husband and I can say we made it together, and we did it with their best interests — and health — in mind. I can’t think of anything less controversial than that.

More Like This
Covid Vaccine “Deserts” For Kids Under 5 Make It Almost Impossible For Parents To Find Shots
Does The FDA's Plan To Limit Lead In Baby Food Go Far Enough?
Why Does My Newborn Shake Sometimes? A Pediatrician Explains
Celebrate Your Baby’s 1st Valentine’s Day With These Instagram Captions
What Parents Are Talking About — Delivered Straight To Your Inbox