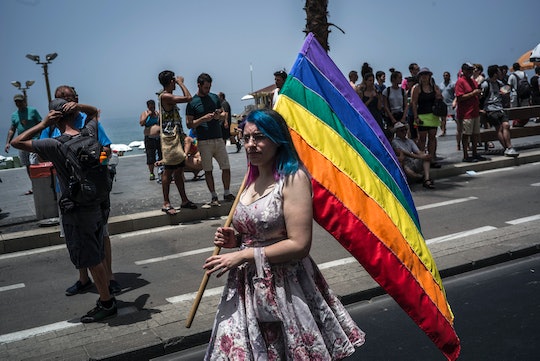 After promising during his 2016 presidential campaign to "fight for" LGBT people, President Trump unleashed a series of tweets Wednesday announcing that transgender Americans are banned from the military. The tweets met with outrage from many, but especially those most affected by the decision and the bigotry it reflects. The LGBT community's response to Trump banning trans people from the military was swift, angry, and determined.

In a stunning series of tweets, Trump wrote:

After consultation with my Generals and military experts, please be advised that the United States Government will not accept or allow...... ....Transgender individuals to serve in any capacity in the U.S. Military. Our military must be focused on decisive and overwhelming.... ....victory and cannot be burdened with the tremendous medical costs and disruption that transgender in the military would entail. Thank you

Trump made no mention of the fact that transgender people have served in the U.S. military for years. In fact, trans people are already twice as likely to serve in the military. He provided no evidence of the "tremendous medical costs" or "disruption" that he alleges having trans people in the military causes. But these facts and the general intolerance exhibited by Trumps decision were not lost on the LGBT community, and they are understandably and rightfully pissed.

Some pointed out the fallacies in Trump's tweets:

And offered support to trans members of the community:

Some informed "Donald" that he chose the wrong people to pick on:

GLAAD, the largest nonprofits advocating for the rights of LGBTQ rights and inclusion, issued its own statement in response to Trump's announcement. The statement alleged that leading up to Wednesday's tweets, Trump had purposefully delayed recruiting trans people to the military after President Obama lifted the ban on their participation over a year ago:

As many noted Wednesday morning, trans Americans exhibit bravery and courage just by walking down the street in a country where they are at constant risk for assault and murder. Usually in doing so they at least have the support of the LGBT community, who were more than happy to speak out against Trump Wednesday. It's impossible to know whether the backlash will cause the president to rethink his position, but given his typical reaction to criticism, it's unlikely. If that's the case, trans people and the LGBT community around them will have to fight harder to turn back the tide of bigotry. Unfortunately, that's something we've gotten pretty good at.

More Like This
An Ode To Kirstie Alley & Her Messy Self
Kirstie Alley’s Kids Remember The Actress As An “Amazing Mother & Grandmother”
Pinterest Predicts Their Top 2023 Trends In Parenting, Beauty, Fashion, Home, & More
Khloé Kardashian Shares Relatable "Mom Life" Selfie After Her Baby Boy Spit Up On Her