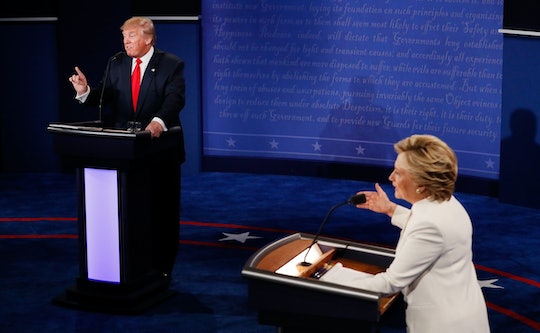 LGBT Rights Were Ignored Again At The Last Presidential Debate, Which Is Unfortunate

We haven't had a broad statement from either candidate on how far we have to go in supporting LGBT folks — a consistently marginalized population just on a policy level — let alone a specific address on what measures they would implement to ensure better LGBT protections under the law. The only memorable mention of the queer community all election season long is the god-awful memory of Republican presidential nominee Donald Trump painstakingly trudging his way through the "LGBTQ" acronym during his speech at the Republican National Convention. Democratic presidential nominee Hillary Clinton is somewhat better at peppering in more shoutouts in her campaign trail speeches, paraphrasing her own quote about women's rights to declare, "Gay rights are human rights and human rights are gay rights."

But when it comes to the debate stage, there hasn't been a single moment to spare for LGBT issues. And it's true that there are horrific, pressing, and divisive matters on the table which have taken precedence: police brutality against people of color, how to combat Islamophobia in America, and Donald Trump's alleged sexual misconduct, to name a few. Each of these issues takes aim at a marginalized group in America, and is important to discuss.

But it seemed as if the big moment that earned media outcry and obsessive unpacking following the last presidential debate is about how Donald Trump is the first presidential candidate in modern history to say the election is rigged before it even takes place, coupled with his threat to deny the legitimacy of Clinton's presidency if she wins. It's a grim, precedent-shattering admission, to be sure. But is it all that surprising coming from Donald Trump? Couldn't those few moments in the final debate, or moments when the candidates were given a chance to speak on matters that had already been addressed (like Aleppo), have been dedicated instead to the nearly 10 million self-reporting (which is to say nothing of the unreported population) queer folks in America?