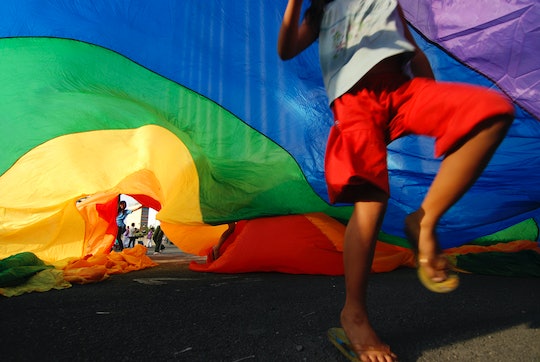 As a growing number of celebrities both parents and kids look up to have made important conversations about gender more common, a new survey conducted by the Trevor Project has found that more LGBTQ+ youths are using pronouns beyond "he" and "she" on a regular basis. One out of every four of the LGBTQ+ youths surveyed to be exact.

The Trevor Project, an LGBTQ+ suicide prevention organization that also focuses on crisis intervention, recently conducted a sweeping national mental health survey of over 40,000 LGBTQ+ teens and young adults between the ages of 13 and 24 to help shed light on "the unique challenges that LGBTQ youth face every day."

The organization's second annual survey of its kind found that around 75% of respondents said they exclusively used the gender-specific pronouns "he/him" and "she/her," while 25% reported using non-gender conforming options. Pronouns like "they/them," for example, sometimes used in a combination with "he/him" or "she/her," or perhaps using the neopronouns such as "ze/zir" or "fae/faer." The neopronouns were found to be used by only around 4% of those surveyed.

In recent years, celebrities have helped make conversations about gender identity and gender fluidity more commonplace. In 2019, for instance, singer Sam Smith came out as nonbinary, gender nonconforming, according to NBC News. "I’m not male or female. I think I float somewhere in between," Smith said during a conversation with Jameela Jamil. And in an interview with Out Magazine last year, Queer Eye's Jonathan Van Ness described himself as "nonbinary" and "genderqueer."

Respecting a person's pronoun of choice is essential to their mental health, as The Trevor Project's research pointed out. The survey found that transgender and nonbinary youth "who reported having pronouns respected by all or most people in their lives attempted suicide at half the rate of those who did not have their pronouns respected," which is hugely important considering the fact that more than half of the transgender and nonbinary youth surveyed admitted they had considered suicide.

In 2019, Merriam-Webster Dictionary actually updated its definition of the word "they" in an effort to respect nonbinary pronouns, writing the word can be "used to refer to a single person whose gender identity is nonbinary." What's more, the word "they" was also used as the word of the year for 2019 by the dictionary.

Respecting a person's pronoun is an easy choice to make and clearly it does a world of good. As the Trevor Project explained, "Respecting the language that youth use to self-identify their gender is not only polite, it can save lives."