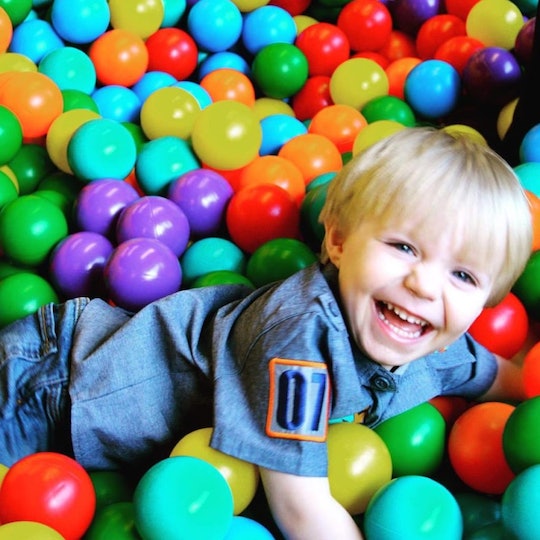 There are days when you know you are just crushing this mom thing — magical moments where you're overcome with pure joy and gratitude for this tiny little human that you've created. I had one of these moments on a spring afternoon in 2017 while I was walking through a street fair in New York City with my then-4-year-old son. We came to a section where there was a small fiefdom of bouncy castles that kids could go in and jump around before the fair came to an end along Broadway. My son had never seen a bouncy castle before, let along been in one, but he seemed interested and it was only $3 so I thought, why not make a quick stop?

He took off his shoes and waited patiently with the other kids to be let in. While waiting for his turn to enter, he seemed unusually calm. His face was pretty expressionless as he stood there waiting to try something new. He had no idea what to expect and yet, had no anxiety or second thoughts. He had no preconceived notions, no uncertainty or ambivalence about the unfamiliar. Just an openness to climbing into the gaping maw of a 15-foot billowing vinyl structure and seeing what came next.

How nice it must be to try something new without being afraid, I thought. When it was his turn, he climbed in without hesitation and, at first, wasn’t able to bounce, or even walk. His tiny body struggled to find enough balance to even stand, while the more experienced bouncers, jumped with up and down with glee all around him. I watched as he tried to gain his footing, half expecting him to become quickly overwhelmed and want out in fear of being trampled by the bigger kids. But he didn't.

As I watched, I I realized I couldn’t be happier.

After falling several times, he finally he began to find enough balance and started to jump around. Now the expression on his face completely changed. He was laughing and squealing with unadulterated bliss. I watched him as he went from jumping and laughing, to climbing the ladder and going down the slide over and over. He laughed as he bumped into other kids, who were also laughing and they banged their heads on the inflatable walls, falling down on top of each other over and over. It was chaos, but it was also completely uninhibited.

As I watched, I I realized I couldn’t be happier. Right then, right there, I was overcome with pure joy, as if I was in the bouncy castle jumping around with him.

I had many blissfully happy experiences like these in my own childhood. There were Ball pits, bouncy castles, tube slides, roller coasters, and the people I shared those laughing moments with — my brother, my cousins, best friends and my own parents. Back when I did not have a care in the world and life was often, just pure fun — pure joy.

I remembered what it was like to be a kid jumping around in a bouncy castle and getting that feeling of, "THIS IS THE BEST THING EVER." And just as I was remembering this feeling and how uninhibited joy felt, I was smacked in the face with the realization that I don’t even remember the last time I had this feeling.

As adults, we don’t have bouncy castles. We have careers, bills and responsibilities. Yes, we can feel happiness. We can even be content and have moments of feeling excited, proud, grateful, satisfied — all great feelings. But when was the last time you actually had the bouncy-castle feels? When was the last time you were literally jumping up and down with pure joy, laughing uncontrollably, feeling like, "This is literally the best thing ever?"

As adults, we have to deal with our responsibilities, so we become tired and desensitized to the things that once brought us so much joy. As we grow up and go through life, we experience things like hurt, disappointment and betrayal, all of which can easily consume and kill our bouncy-castle vibes. We are afraid to try new things and to get out of our comfort zone even if it means we may find joy.

I’ve always known this to be true, but it became crystal clear as I watched my son jumping around in that inflatable castle without a care in the world: our happiness as adults is now our responsibility.

When you're a child, happiness and joy is easy to come by. But as an adult, it can be harder to find.

As adults and as parents, it’s our responsibility to re-learn what our "bouncy castle" is. It’s still there. We just need to look a little harder to find it. Fortunately as parents, we have our kids to remind us and teach us what joy looks like. Those golden moments are still there for the taking, we just need to peel our socks off, trust, and then get hopping.