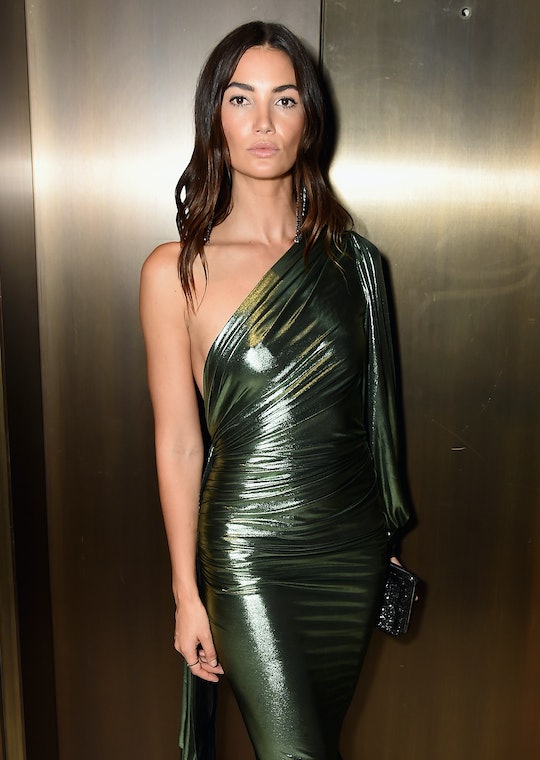 Another day, another celebrity baby making their debut. This time the lucky mom is Lily Aldridge, who gave birth to baby number two on Tuesday, Jan. 29, as People reported. As for the name? It's incredibly regal and sweet.

Aldridge and her husband, Kings of Leon singer Caleb Followill, first announced their exciting baby news in August 2018. Aldridge, who already shares a 6-year-old daughter named Dixie with Followill, revealed the development via bikini-clad selfie. "Surprise," she teased at the time.

Cut to five months later, and now the little one is finally here. "Winston Roy Followill. Blessed our lives January 29, 2019," Aldridge captioned a black-and-white shot of the baby's feet, which she has since deleted, according to the Daily Mail.

What a distinguished and proper-sounding name, right? It's fair to wonder whether the parents had Winston Churchill in mind when they decided on the name.

In terms of Winston's popularity as a name? Winston — which means stone of joy, according to Baby Names — peaked in 1941 and is on the rise again. Per Baby Center's chart, it has steadily increased in popularity since about 2005. In fact, it was one of the most popular baby names in 2017, according to TODAY.

Adorable name aside, Aldridge is likely over-the-moon about Winston's arrival, especially since she loved the experience of breastfeeding.

“I did with Dixie and I just love the experience,” Aldridge told People in October 2018. “[I] feel very blessed I can [breastfeed] because I know it can be different for every woman and that’s okay.”

She also noted at the time that Dixie was “very excited [and] picking out outfits left [and] right” for her sibling-to-be. Aww.

It's likely Dixie wasn't the only kiddo anxiously awaiting Winston's arrival, however. As it turns out, all of the children born to Kings of Leon band members are friends.

"Our kids are always together, they all go to the same school," Kings of Leon band member Matthew Followill explained to Billboard.

Who knows, maybe the Kings of Leon kids will form their own band one day.

It's not clear why Aldridge deleted the original post announcing Winston's birth, but it might have to do with privacy. Both Aldridge and Followill are pretty private, especially where it concerns their growing family. There aren't many instances of the two publicly talking about Dixie, for example, except for that time Aldridge revealed the most adorable parenting anecdote to People.

Yep, it sounds like Aldridge is one amazing and enthusiastic mama.

Although fans probably can't wait to learn more about Winston, it's likely they'll have to wait a bit longer. For now, supporters can enjoy his regal little name.