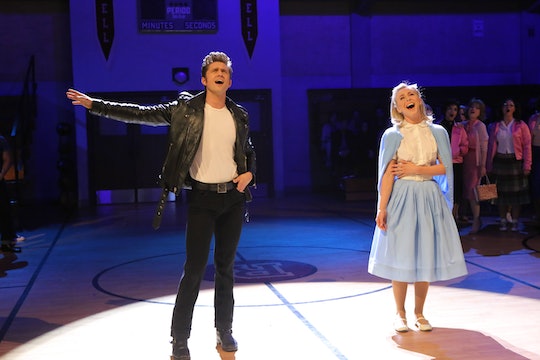 Lin-Manuel Miranda Is Live-Tweeting 'Grease: Live!' & It's The Best Part Of The Show

Some chose to dance and sing along to Grease: Live! Sunday night, hand jivin' and combing back their hair with the best of them. Others chose to live-tweet the event, and the creator of Hamilton was one of them. Lin-Manuel Miranda live-tweeted Grease: Live! and it was the best part of the show. For those who don't know, Manuel Miranda is the creator of the ever-popular Broadway musicals In The Heights and Hamilton. Among his many talents, Miranda is a composer, lyricist, actor, and a rapper. Clearly a fan of theater, music, and dancing, Miranda took to Twitter to voice his excitement — and often his praise of the actors and their stellar performances — of the long-awaited, live television remake.

Miranda was clearly a fan of Vanessa Hudgens, and who can blame him? Earlier today, the actress made a heartbreaking announcement on Twitter that her father had died a day earlier and that she'd be dedicating her performance in his memory. All of Twitter, Miranda included, applauded Hudgens for her incredible performance in light of her father's death.

Miranda was also impressed with the costumes, the dancing, and Danny Zucko, aka Aaron Tveit. (Truth be told, so was I.) Here are Lin-Manuel Miranda's best tweets, because what's a live-television show without his commentary? (The answer is: Nothing.)