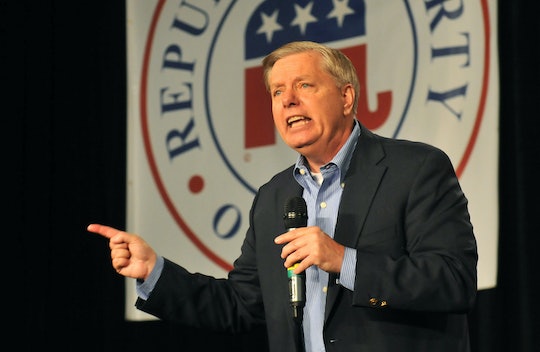 After Trump suggested that the United States ban all Muslim people, calling for a "total and complete shutdown of Muslims entering the U.S.," the outcry from an entire spectrum of people — from the United Nations to foreign leaders to Republicans — has been loud, and certainly critical. Senator Lindsey Graham, though, might have said it best. The Southern California governor gave up all pretenses of nice-ifying things when he said, "You know how to make America great again? Tell Donald Trump to go to hell."

But that was only the ringing end to Sen. Graham's talk, however, which he gave on CNN's New Day on Tuesday in response to Trump's comments Monday. He said he felt "disgusted" and then turned towards the camera because he "[wanted] to talk to the Trump supporters for a minute."

"I don't know who you are and why you like this guy. I think what you like about him [is] he appears to be strong, when the rest of us are weak; he's a very successful businessman; and he's going to make everything great. He's going to take all the problems of the world and put them in a box and make your life better. That's what he's selling — here's what you're buying: He's a race-baiting, xenophobic, religious bigot. He doesn't represent my party. He doesn't represent the values that the men and women who wear the uniform are fighting for. I've been in the air force for 33 years and I retired this June.

He's the ISIL man of the year, by the way ... We have young men and women in harm's way all over the world, particularly in the mideast. They were concerned about this rhetoric because the enemy will use it against us. So, what was concern last week has to be DEFCON 4 this week, because what Mr. Trump is doing — and I don't think he has a clue about anything, he's just trying to get his numbers up and get the biggest reaction he can — [is] putting our soldiers and diplomats at risk. He's empowering the enemy, and this ban, if it's actually enacted, would take people who have been interpreters, who came to our side in Iraq and Afghanistan, who are under siege in their own countries, and [it would] basically become a death sentence for them.

[ISIL] uses that to turn the region against us. Our diplomats and military commanders were very worried when the guy was going to burn the Qur'an. Remember that? The guy in Florida? I've been there 36 times. I can tell you that most Muslims, most people in the faith, reject this radical ideology. The reason we'll win this war is because very few fathers and mothers want to turn their daughters over to ISIL. The way you win the war — just don't kill terrorists. Invest in the lives of others. Young people in the mideast are less sectarian. That's where we should be investing: giving a young woman a voice about her children in the mideast is the ultimate antidote to terrorism. That's how you win the war, a hopeful life versus a glorious death, and what Mr. Trump is doing is undercutting everything we stand for. He's undercutting how you win the war, he's empowering the enemy, and he's putting people at risk who are serving our country.

Now, he's never served. Going to a military high school, Donald, is really not military service. You've never worn the uniform. You've never been on a ford operating bay. You've never been at a PRT as a member of the Department of Justice or the Department of State. You've never been a USAID worker going into some devastated, poor area in Iraq and Afghanistan, trying to help our country by helping others. So knock it off. You're putting people at risk. He is empowering radical Islam, and if he knew anything about the world at all, [he] would know that most Muslims reject this ideology and they've died by the thousands trying to combat this radical ideology. You're undercutting their efforts, you're slandering their sacrifice, you're marginalizing what they're trying to do to make the world a better place.

You know how you win this war? You side with people in the faith who reject this ideology, which is 99 percent. And you know how you make America great again? Tell Donald Trump to go to hell.

Hopefully, advice from someone who has been on the ground with the very people Trump is spewing hate against will knock some sense into some of the people who are siding with Trump on this one.