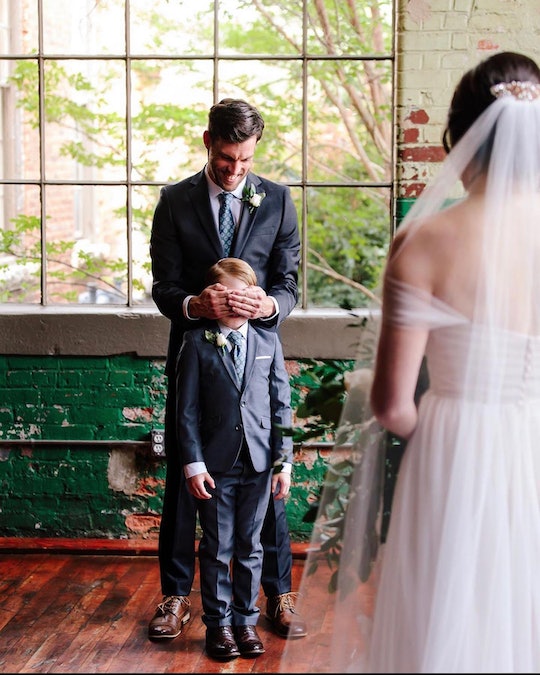 This Boy's "First Look" Moment With His Stepmom In Her Wedding Dress Was So, So Pure

When Rebekah and Tyler Seabolt met last September, their connection was instant. "We just knew we were meant to be together right away," she tells Romper. Not simply as a couple, but as a new family that includes Jude, her 9-year-old stepson. And when you see that little boy's reaction to seeing his stepmom as a bride about to marry his father and become one of his parents, you most likely will also become overwhelmed with emotion.

Rebekah and Tyler Seabolt tied the knot on June 26 in Monroe, Georgia after a whirlwind romance. They connected online even as Rebekah tells Romper this was her "last attempt." "I was done with online dating," she says. As for Tyler, his now-wife says that his "mom had asked him to promise to make an effort to try to meet someone."

The stars aligned and they met. Within weeks, Tyler was introducing Rebekah to his son Jude, who fell for his dad's new girlfriend just as quickly. "Jude asked his dad after we had been together for about a month and a half if it was too soon to tell me he loves me," she says. "Of course I cried when he told me, I always cry when Jude is involved."

When it came time for the couple to get married, Rebekah wanted to make sure Jude was just as involved and spoke to her wedding photographer Ashah Smith about having two different "first look" moments on camera. One with Tyler and another with Jude to symbolize her commitment to both of them, certainly, but also because she "knew that Jude would want to be a part of this."

In the first photo, Tyler covers his son's eyes so he can't peek at Rebekah, something she tells Romper they knew he would probably do. "We had to do Jude's first look right after Tyler's because we just knew he would try to peek." And if he had gotten a peek, the world might not have seen the purest reaction to a little boy seeing his new stepmom in her wedding dress.

It starts with Jude clutching his chest in a moment of total happiness (also please note Tyler's smile).

Then the tears start, as he is so overwhelmed and so present in that moment.

Finally, he goes in for a hug from Rebekah. And in that picture, in the way she holds his head and leans down towards him, she is truly a mom.

Ashah Smith, the photographer behind the shoot, tells Romper that there was "a lot of hustle and bustle" happening at the time, but these first look photos were important to everyone. So they cleared some space and got ready. "With Jude's eyes closed, we put him in some pretty light," Smith says. "... After we were all set, Jude's dad uncovered his eyes and... well, you know what his reaction was."

"I was tearing up while photographing it. It was so, so beautiful."

The moment was perfect, and the thousands of people who've seen and liked the photos on social media would certainly agree. Rebekah tells Romper that one of the loveliest surprises has been all of the responses from stepparents "who send me advice or stories or even just tell me that it's OK if it's hard sometimes."

In fact, that's one thing she hopes people take away from this photo shoot. "It was a perfect moment but our lives are not perfect," she says. "Jude is a regular little boy who acts up just like everyone else."