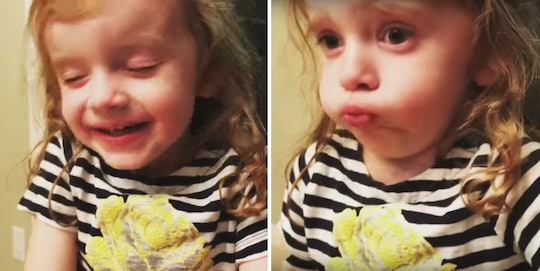 This Little Girl Really, Really Tried To Convince Her Mom She Liked Her Dinner

Trying to come up with meals your kids will enjoy eating can be a thankless job, unless you are the mother of a little girl named Piper who really tried to like her spaghetti. Even at 4 years old, she was choking down her mom's food through dry heaves to show her appreciation. Some children might have just pushed the plate away and refused to eat, but not young Piper.

Mom-of-three Annie Wilkins recently re-shared a video, originally posted on YouTube in 2017, of her then-4-year-old daughter Piper trying to enjoy her supper on Twitter, where it has since gone incredibly viral with over 330,000 views. She also tagged actor John Krasinski's new Some Good News show.

Chatting with Romper about the viral video, Wilkins says she had served spaghetti one night because it's "actually a dinner all my kids will eat!" She had made spaghetti "many times before with no one disliking it," and as all moms know, once you find one meal they'll all eat, you hit that repeat button when you can.

This night, however, Wilkins looked over at Piper while the family was eating dinner together and noticed "she was gagging with every bite" she took. She wasn't complaining or saying she didn't want to eat, just quietly dry-heaving her pasta as the most polite child who has ever existed. When Wilkins asked her if she was OK, she dry-heaved a little more but smiled like a champ and said, "I'm OK!"

Most people were utterly charmed by little Piper. "She is an absolute cultural icon and Whole Mood," one person tweeted. "I am both her and her sibling laughing mercilessly in the background." Meanwhile, another parent lamented, "What I got from this video is that my kids will never love me as much as she loves you."

Piper was, of course, let off the hook by her mom. Wilkins says she told her she didn't have to finish if she didn't like it and Piper was relieved. The proud mom tells Romper she gave "her a big popsicle afterwards" for being such a sweet little trooper. The little girl, who is 7 years old now, has not liked pasta ever since; Wilkins says she figures "it's a texture thing," and of course all moms know kids' food tastes change as they get older and sometimes pickier, so sometimes it's best just to roll with it. Especially if you've got a sweet little girl like Piper trying her level best to muscle through it.