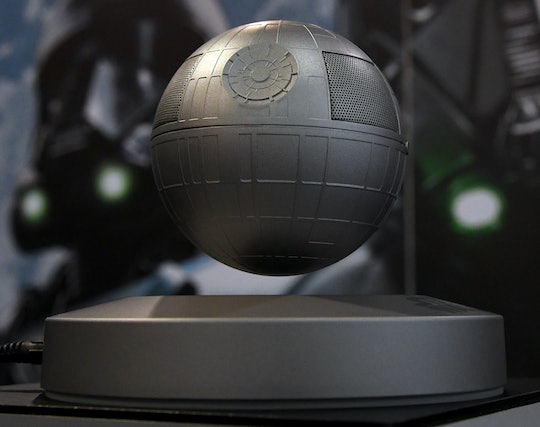 I have many regrets in life, most of which are utterly and completely my own fault. But at least one of those regrets is totally on the shoulders of the Star Wars universe. Because they had to wait until I was basically an old person to create a whole host of amazing female characters. Thanks, guys. Fortunately, there are some girls who know how to fully embrace this new development. An adorable little girl went to Star Wars Celebration dressed as Jyn Erso with her dad, and she is living proof that the force is truly female.

So here is what is specifically so amazing about this little girl named Harley dressing up as Rogue One's Jyn Erso; yes, her costume (created by essentially the best dad on this planet or any other in the Degobah System, Dino Ignatio) was on point. Definitely film quality. But it wasn't just the costume that made Harley so memorable; it was the fact that this little Jyn Erso approached every woman she saw dressed as Princess Leia Organa and handed over the plans for the Death Star. Genius. Harley was cutting out the middle men, keeping it just between the women who knew how to get things done.

Of course, this year's Star Wars Celebration in Orlando, which ran from Apr. 13 to Apr. 16 on the 40th anninversary of the release of Star Wars: A New Hope, saw a veritable bevvy of Leias who came to pay homage to the late Carrie Fisher. Fans showed up dressed as every movie version of Leia they could think of as a loving way to honor her legacy. But I think her legacy was perhaps best captured by young Harley.

She and her dad created data cards containing the Death Star plans and she proceeded to hand them out to Return of the Jedi Leia in her gold bikini and also Leia from the planet Endor. There were the classic long white gown versions of Leia, Cloud City Leias... you name it. Even R2-D2 got a copy of the plans, probably just in case something went amiss.

The final Death Star plans, in the words of Harley's father, were "delivered to the Princess herself."

There was something so powerful about this gesture, a reminder that two of the Star Wars' universe most pivotal characters, Jyn Erso and Leia Organa, were fighting for the same cause, but never met. That they were willing to risk their lives for the sake of a better world. That, despite all of the loss they both encountered, they continued to have hope.

If these characters don't represent everything we want to teach the next generation of women, I don't really know who does.

To see more of Harley's adventures as Jyn Erso, not to mention getting a glimpse at her epic Rey costume, head to her dad's Imgur profile.