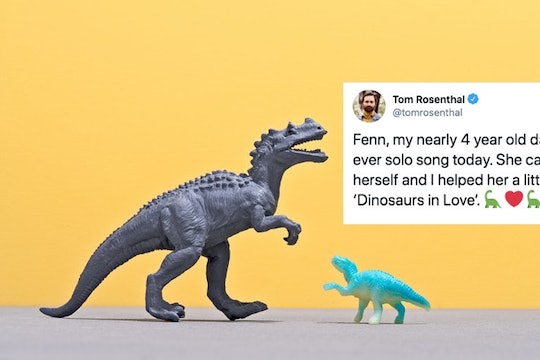 You may have thought you knew a thing or two about our world's most famous extinct creatures, but one clever little girl's song about dinosaurs falling in love, that's gone incredibly viral in less than 24 hours, is about to rock your world. I will admit, I had selfishly never considered the tragedy of dinosaurs falling in love and, well, extinction happening. Out of the mouths of babes, as they say.

Musician Tom Rosenthal recently shared a collaboration with his 3-year-old daughter Fenn about dinosaurs that's charming the pants off thousands of people across Twitter and Instagram. Young Fenn created a truly lovely and frankly insightful melody about the lives of dinosaurs. While Rosenthal told CNN that he encourages both Fenn and his 6-year-old daughter Bess to make music, this was her first attempt at writing a song on her own. "Fenn, my nearly 4 year old daughter, recorded her first ever solo song today," he wrote on Twitter.

Considering the fact that the song has been listened to on Twitter more than 760,000 times (about 15 of those were me), I think it's safe to say Fenn has a solid gold hit on her hands. How could she not with insightful lyrics about dinosaurs doing regular dinosaur things like having parties, eating fruit, cucumbers, and also people? And if you think Rosenthal helped with the lyrics, her father noted on Twitter that "She came up with all the words herself," but he "helped her a little bit with the tune."

And the song's name? "Dinosaurs in Love."

Things in the song start off pretty regular, if historically inaccurate, but that's OK. (Fenn sings about "Dinosaurs eating people," which would be impossible since they didn't exist at the same time.) Now, when she sings about "dinosaurs in love," I think she's really onto something. Because how do we know they weren't in love? Also how do we know dinosaurs don't have parties where they apparently "eat fruit and cucumber?"

Fenn seems fairly certain this was happening and her new fans are ready to believe her, even if they were thrown for a loop by the ending of the song when Fenn darkly sings, "they didn't say goodbye."

Several people took to Twitter to share their feelings about her song, with one person writing: "Dinosaurs fell in love then died and they didn’t say goodbye... wasn’t ready for that ending actually." And another wrote, "this starts like a typical child’s song does and then the end actually hurts a little."

I suppose it would make sense for little Fenn to be a musical ingenue considering her dad is a well-established British musician, who's created popular songs like "My Life Is A Song For You." Also he once produced an entire album called Fenn, so she really had to step up her game, didn't she? Hey, if this little girl is already making us look differently at dinosaurs with a song that barely lasts one minute, imagine what she could be doing in a few years?

I just hope she turns her insightful gaze towards sharks next...