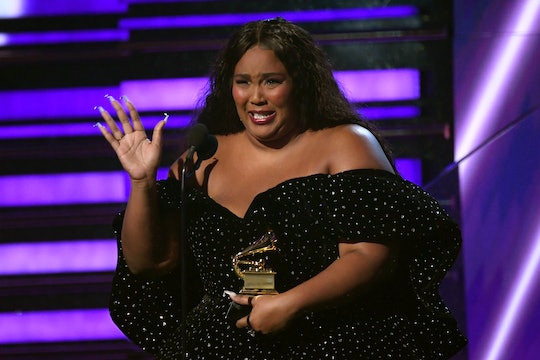 Lizzo Jamming To Aerosmith's Grammys Performance Is Good As Hell

Lizzo really is all about supporting other artists and lifting them up, especially when it means she can rock out and have a great time. When Lizzo jammed to Aerosmith's Grammy performance on Sunday, it was truly the crossover moment no one knew they needed. But, as ever, she delivered exactly what we wanted.

In fact, Lizzo seemed to sort of casually own the Grammys in 2020. First she opened up the show with a lovely, heartfelt performance dedicated to Kobe Bryant, who tragically died earlier on Sunday in a helicopter accident. But in true Lizzo fashion she managed to be respectful and subdued one moment and throw herself into a dazzling performance the next. She went on to win the Grammy for Best Solo Performance for "Truth Hurts," one of three Grammys she had already won that night, two of which she won before the show got underway. And how does a superstar celebrate that kind of win? She changed into a shimmering silver dream of a dress and rocked out to Aerosmith's performance of "Walk This Way" in a Grammy moment that was destined to become a meme. Please note her delighted face when lead singer Steve Tyler leans in to sing to her and also her amazing ponytail and fringes on her dress.

Lizzo is obviously a true believer in rejoicing in the work of other amazing artists, including legendary rockers like Steve Tyler. She actually made note of how important she believes it is for artists to support each other in her acceptance speech for her Grammy award earlier in the evening, saying:

You guys create beautiful music. You guys create connectivity and as I'm speaking to all of y'all in this room, we need to continue to reach out. This is the beginning of making music that moves people again. making music that feels really f--king good, that liberates people. Let's continue to reach out. Hold each other down and lift each other up.

To prove her point she went ahead and lifted herself up by getting on down to Aerosmith.

To his credit, Steve Tyler looked seriously charmed to have Lizzo's fringe shaking his way during his performance. It was a real crossover moment between the classic and the modern.

And more importantly, it was really just great seeing Lizzo totally enjoying herself at the Grammys instead of simply showing up and sitting in her seat.

She deserves all of our love.