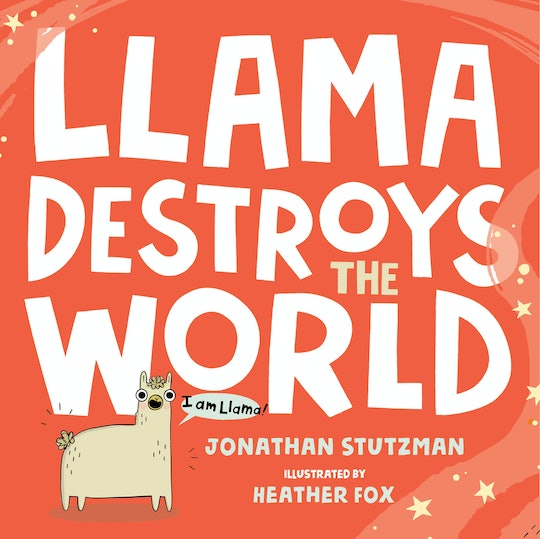 On Monday, Llama found lots and lots of cake — and ate all of it. In fact, “It was more cake than any llama should ever eat.” This instance of gluttony set the wheels in motion for total and absolute destruction in this newest Llama book about to hit shelves on May 7: Llama Destroys The World. This book is perfect for kids ages 4 and up, and it’s written by Jonathan Stutzman and illustrated by Heather Fox.

So why is this a must-have for your kids’ bookshelf? This story is filled with llama drama and will having everyone laughing out loud. Llama Destroys the World starts out innocently enough — with a llama eating some cake. However, like I said, it was a lot of cake. After gorging on cake on Monday, that following Tuesday, Llama squeezed into some tight dancing pants (been there). After practicing some killer dance moves, the llama’s polka dot pants ripped with the force and sound of a thousand jet engines. The force of this rip caused a black hole in the universe (also been there, probably). “It was an honest mistake. It was a delicious mistake. One of those mistakes that leads to more mistakes and, eventually, the ultimate doom of everything,” the book reads. Who knew eating a ton of cake and ripping your dancing pants could cause the destruction of the entire world?

Animals, bicycles, pizzas, umbrellas, mailboxes, kites, llamas full of cake — you name it — flew into the air because of the force of that rip — but you’ll have to purchase the book to find out more. What happens to the universe? Are we really doomed? Did the llama ever stop eating cake? Romper received an exclusive book trailer to this newest book filled with plenty of llama drama, but unfortunately, that forceful pants rip also ruined the rest of the book trailer. But we do have some of it here. On a side note, we didn't have book trailers when I was a kid, and I so wish I did. What a cool idea.

Now my 10-month-old son's (read, my) favorite book right now is Llama Llama Red Pajama. It's full of llama drama, rhymes, and moms telling their kids to stop bothering them for a drink of water right after they get put down to bed. So if you haven't read that one, I strongly suggest you add it to your cart along with Llama Destroys the World, Llama Llama Nighty-Night, or Llama Llama I Love You. And if that's still not enough to get your llama fix — I mean, your children's llama fix — there's even a Netflix original series called Llama Llama that is centered around the same llama from Llama Llama Red Pajama, Llama Llama Nighty-Night, and Llama I Love You. (I've said the word llama a lot here.)

But if this trailer has you mega-hyped, you can purchase Llama Destroys the World from IndieBound, Barnes & Noble, Books-a-Million, Powell's Books, or Amazon on May 7. This would make a great late Easter or graduation present. And until then, enjoy this awesome book trailer.

More Like This
Chelsea Clinton On Teaching Her Kids How To Embrace A New Sibling
The Stolen Year: Anya Kamenetz Wants To Know Why U.S. Covid Policy Failed Children So Spectacularly
How Much Hair Loss Is Normal? 9 Signs You’re Losing Too Much Hair
How To Tell If Someone Is Lying To You: 34 Signs To Watch For