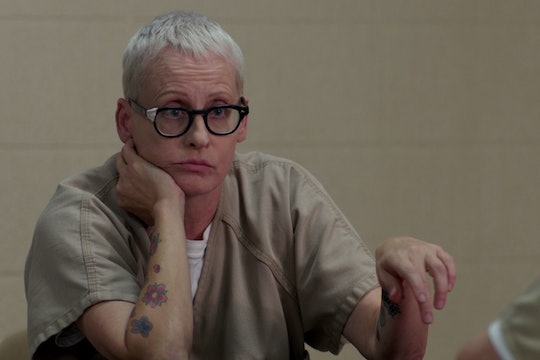 Lolly's Backstory On 'Orange Is The New Black' Is Revealed, & She's Been Dealt A Bad Hand

(Warning: This post contains spoilers from Orange Is the New Black Season 4, Episode 7.) Every show has them, the characters that just break your heart because there is nothing you can do to save them when a certain horrible fate is in their future. Such is the case with Lolly from Orange Is the New Black. We remember Lolly as the paranoid, fast talking and sometimes nonsensical plain companion on Piper's back in Season 2, but why is Lolly in prison on Orange Is the New Black? So far, she's seemed pretty harmless. OK, except for saving Alex by way of killing Aydin, but that was her doing good, right?

But in Season 4, Episode 7, we were finally given Lolly's backstory and, unfortunately, it was a totally heartbreaking one. She started out young and optimistic about becoming a journalist, but her paranoia and conspiracy theories had always been with her and translated as such into her work. Eventually, the voices she'd been hearing and the out-there thoughts she'd been having about everyone and everything became too much for her to handle.

Lolly ended up losing her job at the paper and eventually took to the streets — enjoying life by serving coffee to neighborhood people — but living a sad life that meant she was also a homeless woman with the mind of someone who needed to be medicated and the ideas in her mind that she was still a journalist. While we don't actually see her get to prison in Episode 7 of the new season of Orange Is the New Black, it's safe to say that her accidental altercation with the police could be what lead her that way.

Literally all the poor woman was doing was trying to fix a wheel on her broken cart, and it ended up being her downfall. The cops thought she was reaching for a weapon to assault them, and that was it. After seeing Lolly's backstory and then her actions in present day Litchfield in Episode 7, it breaks your heart. The woman obviously needs more than Healy following her around, since her character is one of the John Locke (a la Lost) variety. I.e., that character you feel so badly for and would give anything to jump through the TV screen and help.

Lolly seems plenty happy at Litchfield most of the time, but as we have now seen, the voices in her head aren't going anywhere and judging by her past, they are a real part of her. It certainly doesn't help that she was accidentally dragged into Alex's hit man drama, which we can all agree is what sent her over the edge.