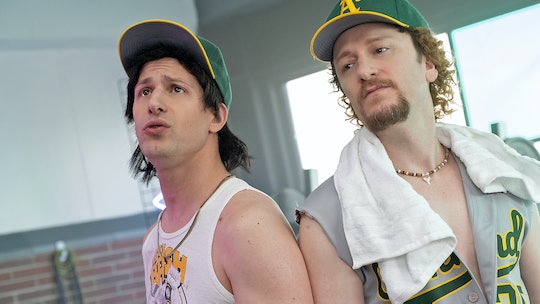 Following the success of Beyoncé's Lemonade on HBO, it was only a matter of time until Netflix released a visual album of their own. But who knew it would be comedy trio Andy Samberg, Akiva Schaffer, and Jorma Taccone — aka The Lonely Island — to do it. As baseball legends Jose Canseco and Mark McGwire. According to Netflix, The Lonely Island Presents: The Unauthorized Bash Brothers Experience is a "visual poem/love letter" that celebrates the 30th anniversary of the Oakland A's 1989 championship. Filled with absurdly funny lyrics matched by visuals that would make Weird Al proud, the 27-minute special reimagines a universe where Canseco and McGwire recorded a rap album focused on their home runs, steroid use, and desperation for parental approval. So basically, it's exactly what you need if you've had a rough week.

Given the visual poem's unexpected drop at midnight on May 23, most critics have viewed The Unauthorized Bash Brothers Experience as a gift. When the album was announced, AV News writer, Britt Hayes, admitted that the Lonely Island album debut ranked high on her “things I didn’t know I wanted until it was abruptly announced on Twitter, thank you, praise the baby Netflix Jesus” list.

Following the album's release, the Rotten Tomatoes Twitter account called the Lonely Island album the "hardest hitting visual poem of the year." Meanwhile, The Guardian's Stuart Heritage called the Netflix special "a dizzying, hilarious half-hour of television" that is "an experience on its own." The writer also praised Samberg's stamp on the visual album.

"It is everything Samberg stands for, perfectly condensed into a tight half-hour," Heritage wrote. "Everybody deserves to watch this today."

When The Unauthorized Bash Brothers Experience dropped on Netflix, most fans online were simply shocked. And seeing as the album was announced about a day in advance, I don't blame them.

However, it was The Unauthorized Bash Brothers Experience's Pacific Coast release time that really had fans in a bind.

"The Lonely Island thing is probably dropping at midnight PST which means 3am for us.....which means I can’t watch til tomorrow," one fan wrote on Twitter.

Nonetheless, most fans were just excited to see the Lonely Island visual album in its entirety. Because let's be real, it's been a hot minute since the group released something this big.

Whatever you're into, if you need a good — but raunchy — laugh this weekend, then go check out The Lonely Island Presents: The Unauthorized Bash Brothers Experience on Netflix. It truly is the gift that keeps on giving.