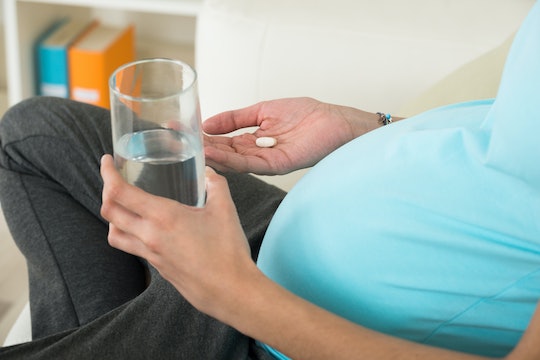 Throughout the past few years, there has been a lot of debate about whether it's safe for pregnant people to take painkillers that contain acetaminophen. Although the general consensus amongst doctors is that it's perfectly safe for pregnant people to take if they have a fever or other mild illness, a new study published on Monday, "Prenatal Exposure to Acetaminophen and Risk of ADHD," found that long-term acetaminophen use while pregnant can lead to attention deficit hyperactivity disorder (ADHD) in kids. But the key word there is long-term, and here's what moms need to know.

In September 2016, The New York Times published an enlightening article titled, "The Trouble With Tylenol and Pregnancy." The article evaluated the link between ADHD and Tylenol, and it cited years of research suggesting that taking acetaminophens like Tylenol during pregnancy "may increase the risk that children will develop asthma or attention deficit hyperactivity disorder (ADHD)," according to The New York Times. Tylenol did not immediately respond to Romper's request for comment.

The finding, which has been discussed by doctors and researchers alike for years, is a pretty scary one to consider. Many parents have expressed hesitation about taking painkillers with acetaminophen for this exact reason, and a number of pregnant parents are skeptical about painkillers in general. The good news is, Eivind Ystrøm, a researcher from the Norwegian Institute of Public Health in Oslo, Norway, recently determined that most parents don't have to worry about taking the occasional acetaminophen. It's the prolonged use of acetaminophens while pregnant, however, that should give people pause for concern.

Ystrøm's study evaluated "95,242 mothers, 75,217 fathers and 112,973 children born between 1999 and 2009 — including 2,246 children diagnosed with ADHD," and about 47 precent of the women studied used acetaminophen at some point during their pregnancy, according to CNN. Ystrøm determined that when parents "used acetaminophen for 29 days or more during pregnancy, their kids were twice as likely to be diagnosed with ADHD, versus women who did not use the drug," according to CBS News. Ystrøm discovered that if a parent used an acetaminophen for a week or less, their children exhibited a decreased risk for ADHD.

But there are a number of factors parents should consider while reading Ystrøm's study. For starters, it's important to note that it isn't clear why some of the parents involved in the study used acetaminophen for 29 days or more while pregnant. Prolonged use of acetaminophen suggests a long-term illness, and one has to wonder if underlying illnesses could have altered or influenced Ystrøm's results.

Secondly, this study isn't meant to dissuade parents from taking a painkiller if they come down with a fever or a cold. The study simply suggests that it's important to consult with a doctor if you feel the need to take acetaminophen for a prolonged amount of time while pregnant, as there's a possibility that repeatedly taking acetaminophen for 29 days or more may be linked to ADHD. Lowering a fever with acetaminophen during pregnancy can be critical — there have been numerous studies linking untreated fevers to birth defects. A growing baby's cells are highly sensitive to temperature, and a high temperature can jeopardize the development of these cells.

Christina Chambers, co-director of the Center for Better Beginnings at the University of California, San Diego, said of the findings, according to CBS News:

The last thing we'd want, heading into flu season, is for women not to use acetaminophen to get a fever down. This study, suggests that if there is a causal association between acetaminophen and ADHD, it's with more-chronic use.

If you're worried about the link between acetaminophen and ADHD, it's best to discuss your concerns with your doctor or another trusted medical health professional. Although these studies can be alarming, a medical expert should be able to put any worries you may have at ease.