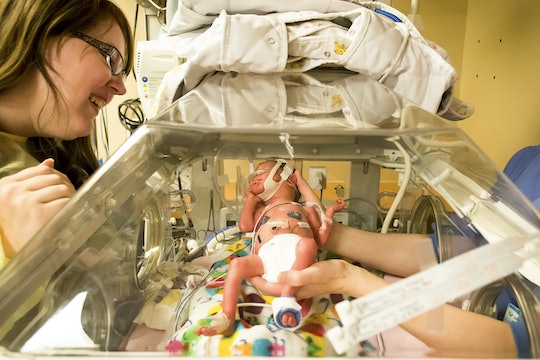 Ever since he was a baby, my son has always been susceptible to respiratory illnesses. No colic, no stomach bugs — just terrible chest congestions and coughs. He’s had recurring croup, caught two flus, and has experienced chronic cough for months on end during colder months. I used to think maybe he would just always be susceptible to such things due to having been born with persistent pulmonary hypertension, but when I finally took him to a new pediatric pulmonologist, she brought up a new possibility: subglottic stenosis — a potentially long-term, unexpected impact of having stayed in the NICU.

The NICU (or neonatal intensive care unit) is where both premature infants and other medically fragile newborns go in order to get high-level care. It’s a special and important place for many families, and also a difficult one in which to find oneself. My premature daughter spent several hours in one before passing away, while my son spent the first two months of his life in another, with me by his side for most of that time. I’ve known many friends and family members whose babies also spent time there. Those of us lucky to eventually take our babies with us went home with the knowledge that our babies might experience some difficulties later on, especially in terms of developmental delays.

But there were other considerations that weren’t really raised, much less focused on, once we were discharged. While I recall a nurse mention in passing the possibility of “issues” arising later regarding his intubation and potential “scarring,” that’s all that was said. When my son began to experience recurring bouts of croup that sent us to the hospital numerous times, his pediatrician didn’t really seem all that concerned. A couple pediatricians suggested my son’s issues might stem from allergies or asthma, but the treatments he was given did not help.

Then I took him to a pediatric pulmonologist who (after giving him an allergy test that cleared that possibility up) brought up the possibility that he actually has subglottic stenosis, a narrowing of the airways. This can be caused by intubation and ventilation (which my son experienced while in the NICU). It made me wonder, then, what other types of long-term effects his NICU stay may have on him someday (if any), and what that means for other parents as well.

Parsing the long-term effects of a NICU stay (due to procedures and treatments) from the long-term effects of the NICU grad’s general health diagnosis can be especially challenging. Quite often, these long-term effects are more a result of the latter than they are of the former. Thirty-four-year-old mom Jillian Bishop had her daughter, Savannah, at 30 weeks. Baby Savannah spent 66 long days in the NICU and experienced developmental delays from the start. This, however, is mainly attributed to how premature she was at birth.

But then we have moms like Chrissy Bernal of Houston, Texas, who gave birth to twins, one of which was in the NICU for 108 days. There are instances in NICU care when a nurse might place a blanket over a baby’s face or head in order to reduce outside stimulation (always under tight supervision and with proper care, of course). While it may seem odd to parents, this allows these delicate infants to get proper rest. Bernal shares one surprising long-term effect of her daughter’s NICU stay: although she is now 20, her daughter still finds comfort in covering her face while she sleeps.

At age 3, she says he still has trouble eating certain foods, and has weak teeth as well.

Another mom, 40-year-old Libby Durkee, gave birth to her son, Oliver at just 24 weeks gestation. Oliver’s medical issues in the NICU ranged from lacking a suck/swallow/breathe sequence to problems with aspiration to being in close observation for retinopathy of prematurity. This led to him being sent home with a g-tube. While most of his health concerns were noticeable right away in the NICU, Durkee says she did discover further issues down the line.

“We noticed around 2 that he couldn’t control his body temperature,” Durkee says. And while her son’s g-tube was removed at age 3, she says he still has trouble eating certain foods, and has weak teeth as well. While these latter issues aren’t entirely surprising given his medical challenges at birth, trouble with body temperature control is certainly surprising.

Dr. Jeanne Mrozek, a neonatologist for over 20 years and the founder and president of the Minnesota Neonatal Foundation, agrees that long-term effects can and do sometimes result from NICU stays. This is certainly the case for newborns who spend a substantial amount of time in the NICU (however infrequent).

For example, infants who spent an extended amount of time on a ventilator while in the NICU have an increased risk to developing some asymmetry of their palate.

But that isn’t all.

“Although the majority of premature babies who spend an extended time in an NICU grow up to be healthy adults, there are increased rates of cerebral palsy, learning and behavioral problems in babies born close to the limits of viability,” Dr. Mrozek adds.

Indeed, studies show that 94 percent of individuals with cerebral palsy developed it either in utero, at childbirth, or in the first 28 days of their life — but the condition may not be detected right away. Such is the case for Toronto-based mother Alana Romain and her twins, born at 25 weeks gestation. Both babies spent months in the NICU, but it’s her daughter who has had a tougher time, health-wise.

“My daughter ... had a brain hemorrhage and needed two surgeries before she reached full-term,” says Romain. Because of this, she figured that she would always be at an increased risk for long-term issues.

“When she was 3, she was officially diagnosed with cerebral palsy,” Romain says, adding that while her daughter’s been discharged, she’s still being monitored by a physiotherapist as well as an opthamologist and her neurosurgery team.

Many of the moms I spoke with also stated noticing behavioral issues with their NICU grads — something I’ve observed with my own son as well.

“As he’s gotten older, we’ve ... noticed a lot more subtle things coming out, like sensory issues, trouble with anger and aggression, ongoing difficulties with toilet training and bedwetting. It’s all a lot of little things that alone wouldn’t necessarily be that concerning, but when you put it together, it adds up to be a lot, especially since there is no easy solution for those things,” says Romain.

Durkee has also noticed these types of delays in her son. Because he wasn’t as socially and emotionally mature as his peers, Durkee wound up holding him back a grade.

So what can parents in the NICU do to minimize the number of additional, long-term issues resulting from their child’s NICU stay? All the moms I spoke with highly advised working to get their children interventions as early as possible, and building strong support teams to help them through whatever else might come up. Dr. Mrozek also had some nuggets of advice, including maximizing exposure to maternal milk, plenty of skin-to-skin contact (which helps with brain development, bonding, and neuroregulation), proper swaddling, and even pre-treatment of procedural pain with sucrose.

“It has been shown to decrease the response to pain,” says Dr. Mrozek.

Parents can and should advocate that NICU nurses and doctors do everything they can to minimize pain. The American Academy of Pediatrics has stated that experiencing painful procedures in NICU can cause “physiologic instability, altered brain development, and abnormal neurodevelopment, somatosensory, and stress response systems, which can persist into childhood.”

In short, it’s possible many of those long-term issues relating to emotional and behavioral issues could stem from the trauma of NICU procedures — though finding out for sure would still be difficult.

For the moment, my own son is doing well. He’ll likely continue to need albuterol and steroid treatments in the winter months until he gets older (assuming his airways grow enough that the stenosis is no longer such an issue), or potentially forever. He may continue having mild sensory issues, which we’ll keep working on with his other care providers. Mostly, we’re thankful to his NICU team for keeping him alive and sending him home happy and healthy. The NICU is a complicated and difficult place to find oneself, and while we should remain thankful for the care our babies receive there, it’s also important for us to recognize that going home is often the first step to a much longer journey.