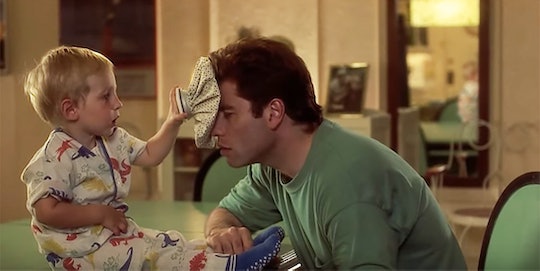 I'm not sure how I feel about reboots, no matter how popular they may be. Although I love a little nostalgia on occasion, some of my favorite movies from the '80s and '90s don't necessarily stand the test of time. And, to be honest, I don't want to look back at these movies with a critical eye. So, when I found out that Look Who's Talking is reportedly getting a reboot, I wasn't exactly sure how to feel about the news, a sentiment Twitter appears to share.

Of course, there's a good chance I'm not alone in having incredibly fond memories of the 1989 film directed by Clueless' Amy Heckerling and starring real life pals John Travolta and Kirstie Alley. But for those of you who might not be familiar with the film already, here's a short rundown for you: Kirstie Alley plays a career-driven woman named Molly who gets pregnant while having an affair with a married client, played by George Segal, according to film review by the late Roger Ebert. She decides to have the baby on her own after he opts to enjoy a "selfish phase" of his life (charming, I know) and ends up meeting a taxi driver named James (played by Travolta) when she goes into labor in his car. And there's the protagonist of this story — Alley's baby, Mikey, who just so happens to be voiced by actor Bruce Willis. Yeah, the comedy's premise is kind of a lot.

Although Look Who's Talking might sound pretty silly, it did manage to bring up some issues that weren't frequently discussed in the media at time, like how Molly enjoys her career and remains ambitious even after giving birth, a plot point that's celebrated in the film. And on top of that, James becomes an important caregiver to baby Mikey, highlighting that men aren't just helpers in the world of parenting. Issues of class, single motherhood, and sexism also figure prominently in the movie, all the while Mikey is just slaying viewers with his jokes about poop. So yes, perhaps it does make sense that Sony Pictures' Screen Gems is reportedly eager to make a reboot, despite the fact that 30 years have since passed.

As Deadline reported, The Wedding Ringer director Jeremy Garelick is set to direct and write the Look Who's Talking reboot, with Adam Fields producing the new movie. Garelick told the news outlet:

What excited me about doing is, I have four kids, including twins, and this is something they can watch, and share some of the experience I had with my wife. Like, figuring out how to raise these kids, with all the mistakes that happen. Add in the voices that are keyed to facial expressions, it just really seems like a fun idea. Everyone can relate to babies. The challenge is, that was a really good movie, Travolta and Kirstie Alley had great chemistry and Amy Heckerling wrote a great script. We’re in the early stages of figuring out what the story is for the modern version of the movie.

Although Garelick seems confident in his vision, some people on Twitter aren't sure what to make of the news.

"Geez. Is originality dead in Hollywood?!" one person wrote.

"Oh, look at that. A successful movie directed by a woman is getting rebooted by a man," someone else argued. "Please, dudes, keep telling me more about how this never happens..."

"Can no one write a new freaking movie???" another person commented. "I'm sooo over these re-do films, good Lord!"

After reading Garelick's aspirations for the reboot, my opinion about it has changed, despite the apprehensive reactions on Twitter. It sounds to me like Garelick understands everything that made the film powerful, fun, and silly, which means there's a good chance he'll honor those qualities in the next installment. That being said, this potential movie is in the beginning stages and it's not yet clear when it will be released. But whatever ends up happening, you can count me in.