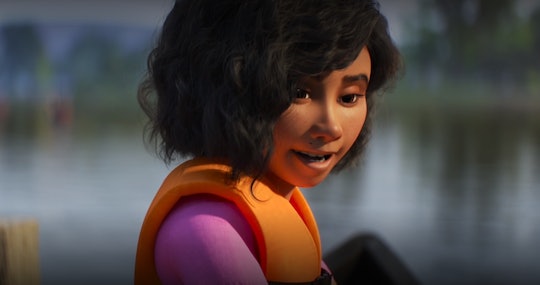 It can be difficult to explain empathy to a child, but Pixar's new short Loop on Disney+ delivers the message beautifully and thoughtfully. The animated short, released in January, follows a nonverbal autistic girl at a canoe camp and, rather than simply tell kids about the importance of empathy and understanding, Loop walks viewers through one young boy's journey to find compassion within himself.

The film's director Erica Milsom tells Romper she had worked with people with intellectual disabilities before and considered it "vitally important" that the person voicing Renee was actually nonverbal rather than acting. To that end, she reached out to art centers in the San Francisco area to find a woman to fit the bill and ultimately met Madison Bandy, the woman who voices Renee.

To help Bandy get comfortable with the role, Milsom and producer Michael Warch decided to simply spend time with her at her home rather than bring her into the studio. "I interacted with her and eventually got her to mimic sounds," Milsom explains. "We tried to keep it improvisational and relaxed. It was a different process from working with a trained actress, but it was important to me to represent nonverbal autistic people for the audience."

"We wanted kids and parents to feel like they were seeing the real deal onscreen in a way they never had before," Milsom says.

The animated short is just over 11 minutes long, but it does a great job of showing the difference patience and empathy can make when trying to communicate with someone with autism. And in an effort to be as realistic as possible, the film crew brought in consultants from the Autistic Self Advocacy Network to watch and offer tips on how Renee would react in different situations.

Producer Krissy Kababa tells Romper they also spoke to parents of autistic children at Pixar to ensure the story they were telling was realistic. "We needed to make Renee older," Kababa says, "because she was originally only supposed to be around 10 years old. But the parents were like, 'No way would any parent let their kid go out in a canoe on their own at that age."

Loop is a great film to watch not just as an example of the power of empathy, but also for nonverbal autistic children who are being represented in an animated short for the first time. And considering the fact that National Autism Association notes that approximately 40% of autistic children are nonverbal, Loop is certain to resonate with many families.