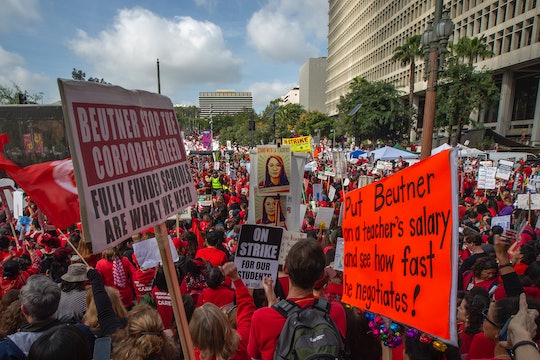 Los Angeles Teachers May Soon Be Back In Their Classrooms

With news that negotiations between teachers' union representatives, the superintendent of the school district — and even the mayor — are finally making progress, Los Angeles teachers may be back in the classroom soon, but other districts might want to strike.

Teachers still have to vote on whether the new agreement will be accepted, but accepting it would put an end to the historic six-school-day-and-counting shutdown, which has seen some 500,000 students and their families scramble to adjust.

The strike has had public support: Celebrities from Busy Philipps to Marlee Matlin have weighed in on behalf of teachers. Deadline noted that L.A. firefighters decided to march with the instructors as well.

If the deal goes forward, teachers would likely back at their blackboards (or whiteboards) Wednesday, the Los Angeles Times reported. The agreement would includes a 6 percent pay raise for teachers, lower class sizes, and more nurses, counselors, and librarians at schools, the key points the union wanted to begin with, Caputo-Pearl said, per USA Today.

However, with Beutner having sounded the alarm that the school district will simply not be able to pay for these things in the days leading up to the strike, city dwellwers who follow the numbers closely wonder how — and who — will end up responsible for the bills as they mount up in a city with declining kids, L.A. Weekly noted.

CNN reported that an independent fact-finder agreed with Beutner's assessment that the school district doesn't have the cash to pay the union's demands, with $1.8 billion planned for education spending during the current three-year budget cycle. At this rate, LAUSD claims it could end up bankrupt, according to KTLA News 5.

The union, meanwhile, said the district numbers were inaccurate and that LAUSD has more than enough in its coffers to fund badly-needed school positions and to give the teachers the raise that they have been asking for for several years, CNN noted.

Meanwhile, New York magazine added that classes with 45 kids or more inside L.A. public schools pushed the brewing battle over the edge and into last week's strike, with an additional disagreement between the school district and the teacher's union being over the future of charter schools in the city.

While the adults hash it out, schools in the city have remained open — albeit without union teachers inside — as administrators and subs struggle to care for kids whose parents cannot afford to leave them at home, as Maryland's Herald-Mail Media reported.

Members of UTLA have shown up for massive gatherings outside City Hall and at local schools across the city with unflagging energy, despite very un-Southern California-like weather that has included wind and rain, USA Today noted.

The new deal, if agreed upon, will also remove a key clause in the school district's fine print that allows it to increase class-size ratios on the basis of financial concern.

Mayor Garcetti called the tentative deal "a historic agreement" that will allow for a "new day" in public education in the city, according to Deadline, with many hoping that California's new governor, Gavin Newsom pays more than just lip service to improving the state's public education system, as Capital Public Radio explored.

Even if Los Angeles' public schools soon go back to normal, other districts are experiencing similar conflicts, including Denver and Oakland, where votes are taking place shortly regarding striking, USA Today added.

Meanwhile, parents such as myself cross their fingers that any changes will result in better things. For families, it's pretty simple: Get great teachers and needed resources inside the classroom, and everyone will be happy.